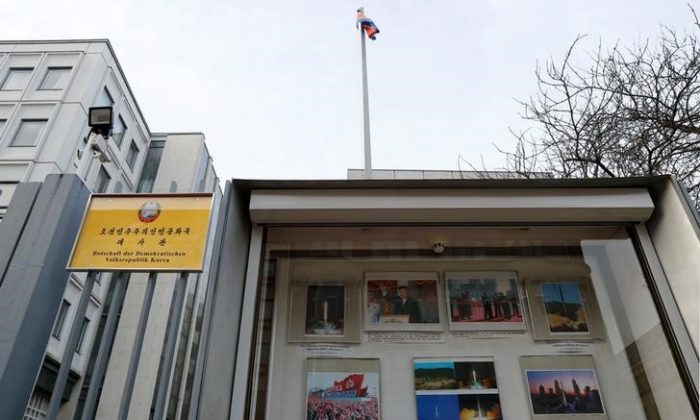 Photographs are pictured outside the compound of the North Korean embassy in Berlin, Germany, Dec. 1, 2017. The sign reads "Democratic People's Republic of Korea". (Reuters/Fabrizio Bensch)
International

BERLIN–North Korea has been using its embassy in Berlin to procure parts for its missile program, the head of Germany’s BfV domestic intelligence agency told a German broadcaster.

No one at the North Korean embassy in Berlin was immediately available to comment on the allegation.

In a program to be aired on NDR television on Monday, BfV head Hans-Georg Maassen said: “We determined that procurement activities have been carried out from there that are, in our view, done with a view to the missile program and sometimes also for the nuclear program.”

He said it was often so-called dual use goods, which can be used for both civil and military purposes.

Comments released by NDR ahead of the broadcast showed Maassen said German authorities prevented such activities when they found them but he added: “We can’t guarantee that we can detect and prevent this in all cases.”

He said it was necessary to presume that parts for North Korea’s launch program “were acquired via other markets or underground buyers had acquired them in Germany”.

North Korea has defied years of multilateral and bilateral sanctions with a weapons program aimed at developing nuclear-tipped missiles capable of hitting the United States.