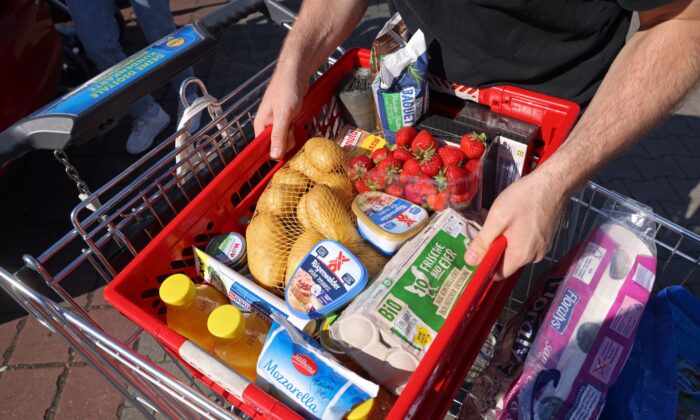 A shopper prepares to load groceries into his car outside a discount supermarket in Berlin, Germany, on June 15, 2022. (Sean Gallup/Getty Images)
Economy

BERLIN—German retailers ended the first half of 2022 with the sharpest year-on-year sales drop in nearly three decades, as inflation, the Ukraine war, and the coronavirus pandemic take their toll, data showed on Monday.

Retail sales in June decreased 8.8 percent in real terms compared with the same month last year, the biggest drop since the time series began in 1994, said the Federal Statistical Office.

Analysts polled by Reuters had predicted a drop of 8.0 percent.

Retail sales also unexpectedly fell compared with the month before: June retail sales fell 1.6 percent in real terms, versus analysts’ predictions of a 0.2 percent increase in a Reuters poll.

Food retail sales in particular saw a decrease of 1.6 percent in real terms compared with the previous month, which is due to higher prices for groceries and an increase in restaurant sales, according to the office.