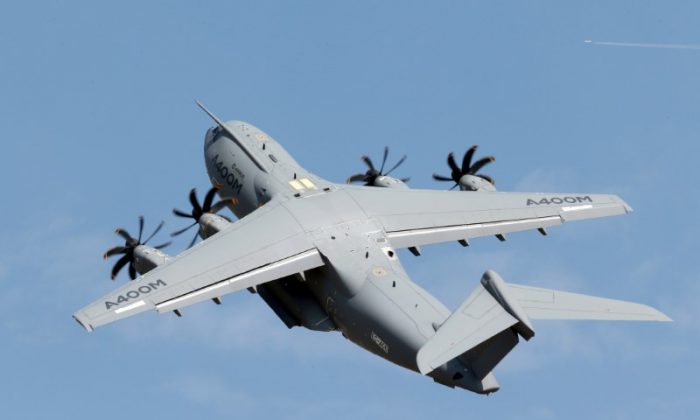 BERLIN—A confidential report by the German Defence Ministry has warned that technical challenges and contractual wrangling with Airbus could impair full operational use of Europe’s A400M military transport plane.

The A400M, Europe’s largest defense project, was ordered in 2003 to give Europe an independent military transport capability but costs have since spiraled and Airbus has warned of “risks ahead” for the program.

“Given the under-financing of the program and the expected demands for delay-related damages, Airbus will not make the needed investments to carry out required improvements,” said the ministry report seen by Reuters on Monday. “The operational use of the plane is therefore in jeopardy.”

The report said Airbus could ask for delays of 12-18 months to resolve remaining issues, such as defensive measures and the ability to deploy paratroopers, as part of its latest negotiations with seven NATO countries involved in the 20 billion euro ($21.9 billion) project.

That means that Germany could face a capability gap in 2021 when its current transport plane, the C-160 Transall, is due to be retired from service, the report said.

Asked about the report, an Airbus spokesman said the A400M program had made significant progress over the past year in the areas of defensive measures and paratrooper deployment.

Airbus defense chief Dirk Hoke told Reuters the company had been engaged in what he called “very constructive” discussions with all European buyers since a meeting at the end of March.

People familiar with the discussions said that buyer nations at the meeting upheld penalty clauses for delays to the program and that Airbus and Germany remained at odds over cash payments Berlin is withholding because of delivery delays, with little significant progress expected until after German national elections in September.

A German Defence Ministry spokeswoman declined to comment on the report but said the A400M had shown in daily operations that it was a capable aircraft and that it was known that the plane did not have all the capabilities required by the contract.

“We are watching the project’s development very closely,” she said, noting that implications of any issues and risks on the project are analyzed carefully by the ministry. She said that Airbus is obligated to find solutions, which is why the buyer nations have been in negotiations with the company.

The report cited other problems, including an unusually high 50 man-hours of work required to prepare the aircraft for a new mission because data had to be coordinated across different systems.

“This is operationally unacceptable and must be reduced,” the report said.

Tobias Lindner, a member of the Germany’s parliamentary budget committee, said the continued problems would have “significant consequences” for the country’s armed forces and criticized Defence Minister Ursula von der Leyen for failing to get a handle on the program in the three years since she took office.