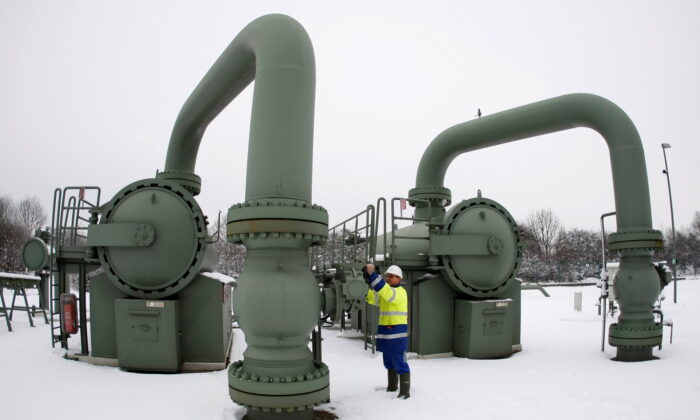 A technician of RWE controls a compressor station in the western town of Huenxe, Germany, on Jan. 7, 2009. (Ina Fassbender/Reuters)
Europe

FRANKFURT—Germany’s federal network agency on Wednesday curbed the permitted return on new infrastructure for power and gas networks in the years to 2029 in a move aimed at protecting consumers from higher energy bills.

In its equity interest rates for the networks published on Wednesday, the authority proposed a permitted return for new infrastructure of 5.07 percent, versus 6.91 percent now, in the regulated sectors, where costs are recouped through fees levied on prices paid by energy customers.

The move, which the authority said was led by the general interest rate environment, comes as a surge in energy prices has left consumers facing an expensive winter heating season.

The grid element accounts for just over a fifth of the final bill paid by power consumers, while in gas it is a quarter, industry statistics show.

The new rates will apply in the five-year periods starting 2023 and 2024 respectively. Rates for old infrastructure were set at 3.51 percent, down from 5.12 percent, the agency said in a statement.

Prior to the ruling, some operators had said drastic cuts would impact the speed of renewable power expansion and the ability of natural gas infrastructure to re-purpose itself for carbon-free usage.

Jochen Homann, the agency’s president, said he had been mindful of the need to allow satisfactory revenues for operators in a sector led by E.ON and had taken on points raised by them in the consultation periods.

But there was also an obligation to lessen the impact on consumer prices, he said.

The agency assumed a risk-free interest rate average over 10 years of 0.74 percent, which it said it could adjust should there be unexpected changes. It granted a risk surcharge of 3 percent.

The final rates are above the first proposals made in July, when the authority had suggested 4.59 percent for new infrastructure and 3.03 percent for old.

Operators say they need plenty of money to upgrade gas networks for their future roles in decarbonized energy systems.

Billions of euros will also go into wind and solar power production plants in coming years, and this capacity needs hooking up to power grids.

Some analysts had supported the operators’ views, while others have said big institutional investors would still be happy with a lower outcome as the German grids deliver steady income streams.

By Tom Kaeckenhoff and Vera Eckert