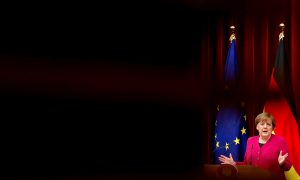 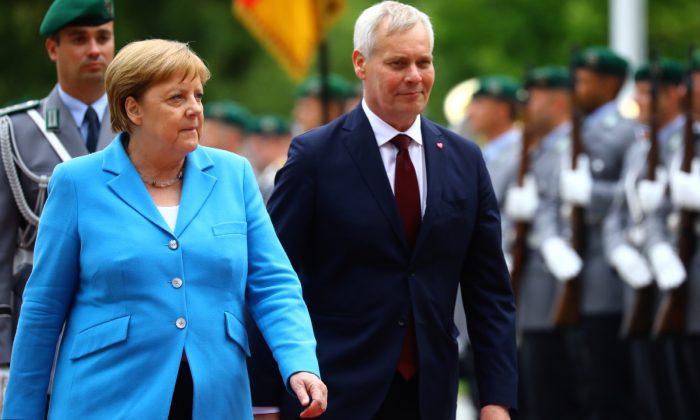 BERLIN—German Chancellor Angela Merkel said she was “working through” a bout of shaking that first occurred in mid-June and struck for the third time on Wednesday, July 10, though she insisted she was fine and that “just as it happened one day, so it will disappear.”

Merkel earlier shook back and forth as she stood outside and looked uncomfortable as she watched a military ceremony marking the arrival of visiting Finnish Prime Minister Antti Rinne, who stood by her side.

After the first shaking episode, when she met visiting Ukrainian President Volodymyr Zelenskiy on June 18, Merkel said she felt better after drinking some water.

“I am fine,” Merkel told a news conference after Wednesday’s meeting with Rinne. “I have recently said that I am working through what happened during the military honors with President Zelenskiy.”

“This process is clearly not finished yet but there is progress and I must live with this for a while but I am very well and you don’t need to worry about me,” she added.

“I believe that just as it happened one day, so it will disappear. Otherwise, I am convinced that I am quite capable (of doing my job),” she said.

Merkel’s office has given no explanation for the shaking episodes, prompting speculation in German media about the cause. The chancellor, 64 and in office since 2005, has no history of serious health issues.

She was also seen shaking on June 27 when she met German President Frank-Walter Steinmeier but her spokesman said she was fine and she later went ahead with her planned trip to Japan for a G20 summit. A government official told Reuters at the time that that was more a psychological issue as she tried desperately to avoid a repeat.

After her Japan trip, Merkel went straight into three days of tortuous talks in Brussels to decide on a new group of nominees for top European Union jobs—a package that has strained her coalition government.

Merkel is renowned for her work ethic and has a reputation for outlasting other leaders at EU summits with her ability to focus on the details of complex discussions deep into the night.

In November 2016, when announcing that she would seek a fourth term as chancellor, Merkel said: “It is a decision not just for an election campaign but about the next four years … if health allows it.”

Were Merkel to be incapacitated, Steinmeier would appoint a cabinet minister as acting chancellor until parliament elects a new chancellor. This need not be Vice-Chancellor Olaf Scholz, a member of the Social Democrats—junior partner in Merkel’s ruling grand coalition.

In the past, Merkel has joked that she is a “sleep camel” who can go days with just a few hours of sleep as long as she gets a full night of sleep at the weekend. She is due to go on holiday later in the summer.

Merkel has loomed large on the European stage since 2005, helping guide the EU through the eurozone crisis and opening Germany’s doors in 2015 to migrants fleeing war in the Middle East—a move that still divides the bloc and her country.

By Andreas Rinke and Tobias Schlie