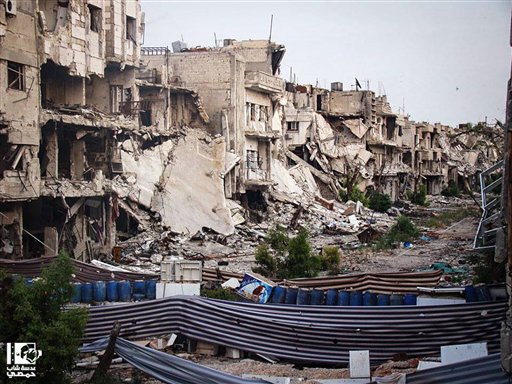 This citizen journalism image provided by Lens Young Homsi, which has been authenticated based on its contents and other AP reporting, shows buildings which were destroyed from Syrian forces shelling, in Homs province, Syria, Tuesday, May 14, 2013. (AP Photo/Lens Young Homsi)
Middle East

German Journalist Detained in Syria, the Most Dangerous Place for Reporters

Armin Wertz, a German journalist who entered Syria to report on the conflict, has been detained and is being held by the Syrian government. His detainment follows the release of a different German journalist, Billy Six, who was released in March 2013.

Wertz texted a friend that he was probably going to be transferred to the coastal city of Latakia, which is an Assad stronghold, according to the Committee to Protect Journalists (CPJ), a New York-based independent, nonprofit organization that promotes press freedom worldwide.

Syria, ravaged by two years of civil war, was listed as the deadliest country for journalists in 2012, according to the CPJ. The organization reported that 28 journalists were killed in combat or targeted for murder by government or opposition forces in Syria in 2012.

“The Syrian government must immediately release all foreign journalists held in their custody. All sides in this conflict must remember that journalists are civilians and must not be targeted for their work.”

Wertz was working as a freelance journalist based in Indonesia and had been trying to cover the war in Syria.

He first informed a friend by a text message over a week ago that he was being held at a police station in the northwestern city of Aleppo, Berlin daily Tagesspiegel, reported.

Wertz has worked for Tagesspiegel in the past. The newspaper said that it’s unclear why Wertz was being held, but CPJ reports that he entered Syria from Turkey without the Syrian government’s permission.

Tagesspiegel also reported that the experienced war reporter sent a second message Sunday asking for his detention to be made public. In his first message, according to CPJ, he asked his friend to keep the message confidential.

Germany’s Foreign Ministry said Monday that it was aware of the reported detention of a German national in Aleppo and was urgently working to resolve the situation.

Six, a different German journalist, had been detained for 12 weeks by the Syrian government before his release in March 2013.

Six was on his way to Hamas when Syrian soldiers appeared from a hillside and made him lie face down in the mud surrounded by soldiers, according to an AP news report in March.

Russian diplomats in Damascus helped secure his release, at which time Six meet with reporters and detailed his experience in captivity at the hands of the Syrian government.

“He said he was handcuffed and driven to a military camp. From there he was taken to a prison in the central province of Hama, where he was held for 12 days. During interrogations, he was blindfolded and several times guards threatened to beat him.”

“Six said he heard other detainees being tortured at night and later saw lots of blood on the floors of the prison’s hallways. In the end, the journalist said, his German passport was probably what saved him from such abuse.”

“He was held at the Hama prison for 12 days, then transported to Damascus, the Syrian capital. Through his detainment, his interrogators accused him of being a terrorist or a spy.”

Six said the he tried to establish a relationship with the prison wards and interrogators and although they threatened him, they never followed through.

He knew that people on the outside were working for his release; particularly when guards suddenly gave him eight slices of bread all at once and let him wash himself for the first time.

Then, they gave Six his passport back, rushed him to a car, and told him he was going back to Germany.

Paul Wood, Middle East correspondent for the BBC, has reported from Syria. He has reported on Afghanistan, Iraq, Libya, Darfur, the Balkans, Chechnya, and  conflicts, as well, but he said that the Syrian conflict “is the most difficult one we’ve done,” according to CPJ.

Woods wrote the following experience on being a journalist on Syria’s frontlines, which was posted on CPJ.

Nearly one year into the Syria war, Woods reported the following coverage for the BBC on Syria’s conflict. Gunshots and blasts are heard in the footage and Woods is visibly tense covering on Syria’s frontlines.

The CPJ reported that the Syrian government began its attempts to block out independent news coverage in 2011, when the uprising the escalation of war first began.

Then, authorities began to expel or deny entry to dozens of international journalists. Citizen journalists, like Al-Tarsha, 17, played a major role in letting the world learn about the Syrian conflict.

Al-Tarsha took video footage of clashes and military movements in Syria. He posted his footage on his Facebook page. A mortar killed Al-Tarsha while he was filming in Homs. He was the fourth media fatality in Homs within a week, according to CPJ.

It appears that, with or without the Syrian government’s permission, journalists may continue to head to Syria’s front lines.

“When a country’s journalists are silenced, its people are silenced,” CPJ wrote, adding that by protecting journalists, they in turn protect freedom of expression and democracy.