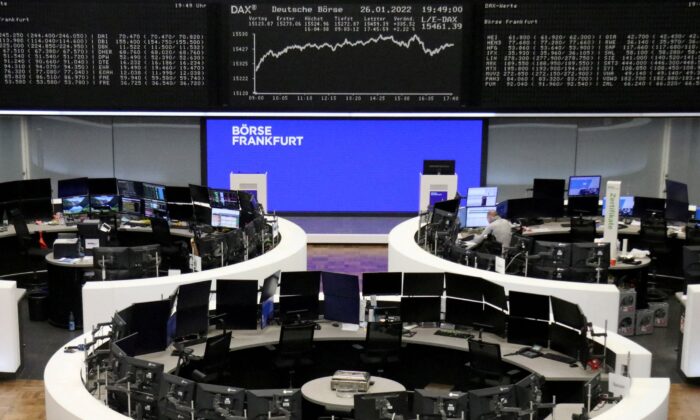 The German share price index DAX graph is pictured at the stock exchange in Frankfurt, Germany, on Jan. 26, 2022. (Staff/Reuters)
Economy

BERLIN—German investor sentiment rose in February on expectations that restrictions to contain COVID-19 will ease, allowing growth in Europe’s largest economy to pick up, a survey showed on Tuesday.

The ZEW economic research institute said its economic sentiment index rose to 54.3 from 51.7 in January. A Reuters poll had pointed to a rise to 55.0.

“The economic outlook for Germany continues to improve in February despite growing economic and political uncertainties,” ZEW President Achim Wambach said in a statement.

“Financial market experts expect an easing of pandemic-related restrictions and an economic recovery in the first half of 2022. They still expect inflation to decline, albeit at a slower pace and from a higher level than in previous months,” he added. “Consequently, more than 50 percent of the experts now predict that short-term interest rates in the euro area will rise in the next six months.”

Thomas Gitzel of VP Bank said in a note that a Russian military incursion into Ukraine could derail Germany’s recovery, especially if Western powers respond with sanctions on Russia’s energy sector and the Kremlin stops gas deliveries to Europe.

“The Ukraine conflict could spoil the economic recovery,” he wrote in a note. “The United States as well as the EU will try [in] the event of a Russia offensive to broadly spare the energy sector from sanctions. But there are remaining risks which could dampen the economic optimism.”