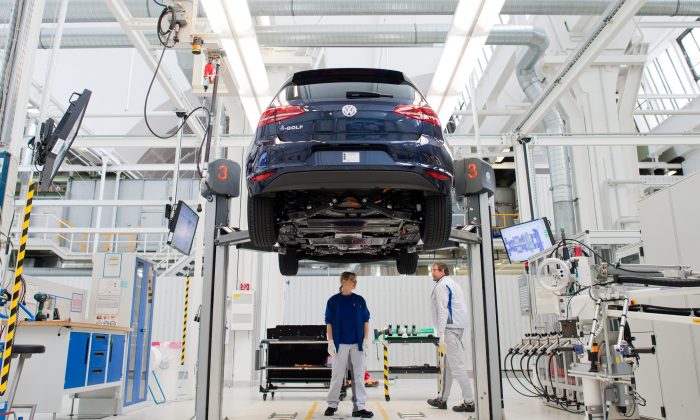 German Investigation of VW Expands to Include Tax Evasion

BERLIN—German prosecutors said Tuesday they have widened their investigation of Volkswagen to include suspicion of tax evasion after revelations that some of its cars were emitting more carbon dioxide than officially reported.

Braunschweig prosecutor Birgit Seel told The Associated Press that the investigation was focused on five Volkswagen employees but would not release their names.

The focus of the investigation is on tax breaks Volkswagen received for producing low-polluting cars that it might not have qualified for if the emissions had been correctly reported, Seel said.

Volkswagen has acknowledged it produced 11 million vehicles worldwide with small diesel engines that contained software allowing them to cheat nitrogen oxide tests. Earlier this month, it also said it found “unexplained inconsistencies” in emissions carbon dioxide from more of its vehicles.

The news did nothing to hurt Volkswagen’s market rally, with the company leading the DAX during midday trading in Frankfurt with shares up 5.4 percent to 115.80 euros ($123.39).

The rise came the day after CEO Matthias Müller told company managers that all technical details on how to fix cars fitted with emissions rigging software in Europe would be provided to Germany’s Federal Motor Transport Authority by the end of November, and that most wouldn’t require major work.

The cost for the retrofitting is technically, physically, and financially manageable. That is a good development.
— Matthias Müller, CEO, Volkswagen

He said the agency has already signed off on a software update, which will alone be enough to fix affected 2-liter diesel motors, and has given the “basic go” to a fix for the 1.6-liter vehicles that will involve a software update and a “relatively simple” replacement of an air filter cartridge and grill. Details are still being finalized on a fix for 1.2-liter motors, but it should also just require a software update.

“For about 90 percent of the group’s vehicles in Europe the solutions are now confirmed,” Müller said according to a copy of the speech he gave at company headquarters in Wolfsburg. “The cost for the retrofitting is technically, physically, and financially manageable. That is a good development.”

Meantime, Volkswagen subsidiary Audi said it had agreed to revise and resubmit to U.S. authorities the parameters of its engine-management software used in the V6 TDI 3 liter engine, which is used in its American models A6, A7, A8, Q5, and Q7 from 2009 on.

Volkswagen also uses the engine in the Touraeg and Porsche has used it in the Cayenne since 2013.

Once approved by the Environmental Protection Agency and the California Air Resources Board, it will be installed in the affected vehicles.

The company acknowledges that so-called auxiliary emissions control devices—the software used to help the cars pass the tests—were “not sufficiently described and declared” for U.S. approval, and that one “is regarded as a defeat device according to applicable U.S. law.”

Audi estimated costs of the fix to be in the “mid-double-digit millions.”