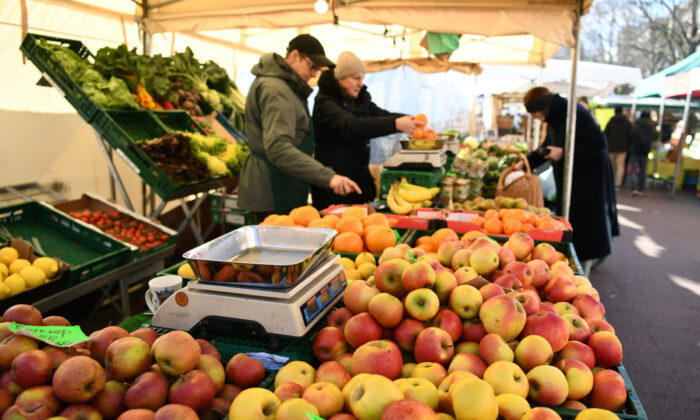 Shoppers peruse a fruit and vegetable stand at a weekly market in Berlin on March 14, 2020. (Annegret Hilse/Reuters)
Europe

Inflation levels in Germany reached their highest level in more than 40 years in April, according to figures released on May 11 by the country’s Federal Statistical Office, also known as Destatis.

Annual inflation grew 0.1 percentage point to 7.4 percent, up from 7.3 percent in March, marking the second month in a row of record-high inflation since the reunification of East and West Germany in 1990, and the fastest rise in consumer prices since 1981.

On a monthly basis, consumer prices went up 0.8 percent in April, having increased 2.5 percent in March. Higher costs of energy and food contributed the most to the increase, Destatis said.

“Energy prices, in particular, have increased considerably since the war started in Ukraine and have had a substantial impact on the inflation rate,” Destatis said. “A similarly high inflation rate was last recorded in the former territory of the Federal Republic in autumn 1981 when mineral oil prices had sharply increased, too, as a consequence of the first Gulf war between Iraq and Iran.”

Destatis said additional factors, including delivery bottlenecks due to ongoing supply chain issues prompted by the COVID-19 pandemic and “the marked price increases at upstream stages in the economic process,” had sent prices soaring further.

Energy product prices were up 35.3 percent in April versus the same month in 2021, following a 39.5 percent increase in March.

The cost of heating oil nearly doubled in April, while notable rises were also seen for motor fuels and natural gas. Price increases on other energy products such as solid fuels and electricity were markedly above the overall inflation rate.

Destatis attributed this to multiple factors, including the ongoing conflict in Ukraine and an increase in the carbon dioxide tax from 25 euros to 30 euros per ton of CO2.

“What stands out in April 2022 is the above-average increases in food prices,” Destatis said. “This is where the impact of the war in Ukraine is becoming more and more visible.”

Food prices rose 8.6 percent for households year-over-year in April and were up from 6.2 percent in March with record increases in the cost of fats and oils (up 27.3 percent), meat and meat products (up 11.8 percent), dairy products and eggs (up 9.4 percent), and fresh vegetables (up 9.3 percent).

The figures published by Destatis come as Joachim Nagel, president of Germany’s central bank Deutsche Bundesbank, said on May 11 that inflation in the country is expected to come close to 7 percent this year. Speaking at a financial conference in Berlin, Nagel reiterated his stance that the European Central Bank should end its net bond purchases in June and increase its deposit rate the following month, the first time the bank will have done so in over a decade.

“The longer the high inflation figures persist, the greater the risk of second-round effects. Monetary policy has to act before medium- to long-term inflation expectations show clear signs of de-anchoring,” he said.