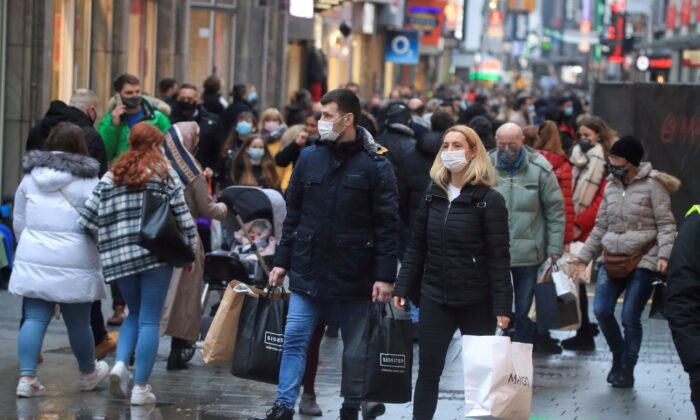 BERLIN—German inflation accelerated at a record pace in September, data showed on Thursday, highlighting growing price pressures as Europe’s largest economy recovers from the pandemic and its companies grapple with supply shortages.

Consumer prices, harmonised to make them comparable with inflation data from other European Union countries, rose by 4.1 percent year-on-year compared with 3.4 percent in August, the Federal Statistics Office said.

That was the highest rate recorded since January 1997, when the EU-harmonised series began.

Christian Lindner, leader of the business-friendly Free Democrats (FDP) and a candidate to become the next finance minister in a possible three-way coalition with the Social Democrats (SPD) and the Greens, took to Twitter to call for a return to a more conservative fiscal policy.

He said the high inflation rate was another reminder that policymakers “should focus on reducing the burden for the middle class and returning to solid public finances”.

Under outgoing Finance Minister Olaf Scholz, who is in pole position to succeed Chancellor Angela Merkel following the SPD’s election victory, Germany ditched its fiscal policy of balanced budgets and took on record new amounts of debt to fight the pandemic.

A breakdown of the inflation data showed that the price of energy and food items had risen the most.

Inflation has surged this year on one-off factors from tax hikes to supply bottlenecks and commodity price rises, fuelling a debate about the need for exceptionally loose monetary policy.

The Bundesbank said this week that German inflation is likely to accelerate from already high levels and will stay above 2 percent through mid-2022, exceeding the European Central Bank’s target for the 19-nation euro zone.

Fritzi Koehler-Geib, chief economist at state lender KfW, said in a note that while one-off effects should disappear in the new year, other factors like natural gas and coal supply shortages could maintain the pressure on prices.

“Energy prices are currently also rising for other reasons: For example, there are shortages of coal and natural gas and supply problems on the part of Russia and Norway. In addition, the cold past winter has emptied stocks, and wind energy is suffering a weather-related lull,” said Koehler-Geib.

She added: “As a result, energy prices are likely to remain high until the end of the year, with gas and electricity components pushing them up sharply. This should keep headline inflation well above 3 percent for the rest of the year, before slowly falling back below 2 percent in mid-2022.”