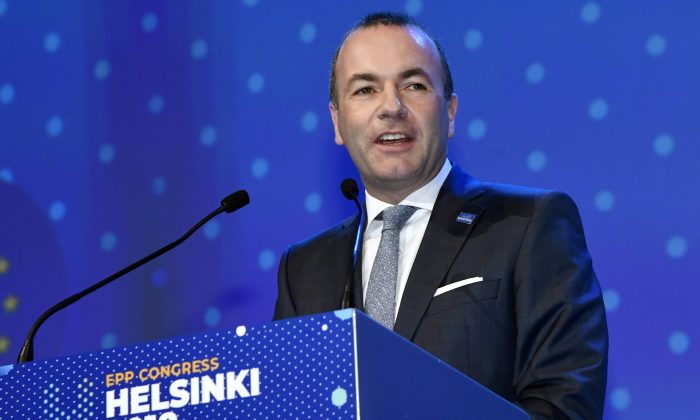 Manfred Weber of Germany delivers his speech at the European People's Party congress in Helsinki on Nov. 8, 2018. (Lehtikuva/Markku Ulander/Reuters)
Europe

HELSINKI—Manfred Weber, a reserved Bavarian who has modeled himself on Germany’s pragmatic chancellor, won the backing of Europe’s center-right parties on Thursday to stand in the race to become European Commission president in 2019.

Weber, a German EU lawmaker, beat former Finnish prime minister Alexander Stubb to become the European People’s Party’s (EPP) top candidate in the European Parliament elections next May. That makes him an early front-runner for the EU’s most influential job, the head of the bloc’s executive, which proposes legislation and negotiates free-trade deals.

Weber, who is little known outside of Germany or Brussels and has never held a ministerial position, won 79 percent of the support of delegates from Europe’s largest political grouping.

“The campaign starts here in Helsinki,” said Weber, a 46-year-old, guitar-playing Catholic who leads the EPP group in the European Parliament.

“We are bridge-builders, let’s use this momentum. Then we will win in May 2019,” he told cheering delegates to the music of Queen’s 1980s hit “One Vision.”

Weber’s words emulated German Chancellor Angela Merkel’s language and style of compromise, a tone he used throughout his bid to become the successor to outgoing EU Commission president Jean-Claude Juncker, also of the EPP, an umbrella group of pro-market conservatives.

Popular with the Christian Democrat core of the group, Weber will now seek to challenge the anti-immigrant populists who hope to score well in May and whom the center-right see as threatening the values of openness and tolerance in Europe.

Merkel has publicly backed Weber and did so again in Helsinki, saying it was a good day for the German Christian Democrats “because we have not had a candidate for the head of the European Commission for a long time.”

Despite concerns elsewhere in Europe about Berlin’s growing power in Europe, with Germans in senior EU jobs, the only German to run the Brussels’ executive was Walter Hallstein in the late 1950s, but who had far less power than today’s Commission chief.

In theory, Weber is well-placed to win the job under a European Parliament agreement that the assembly election winner should take the top Commission post.

Under that deal, designed to bring the European Union closer to voters, whichever group comes top in the European assembly’s election will have first chance to try to obtain parliamentary backing to be Commission president.

Such a contest is aimed at making the vote more relevant to citizens, who have turned out in ever smaller numbers to vote in European elections since the first were held in 1979.

The EPP, including Merkel’s Christian Democrats, is set to win the most seats in the parliament elections, with 177 seats out of a total 705, according to data from different agencies on polls and recent election results analyzed by Reuters.

But Weber’s lack of experience is likely to count against him with EU heads of state, who ultimately have the final say in dealing out top jobs.

But with the EPP losing influence in France and Spain, the rise of right-wing parties across Europe, and with populists in its ranks in Hungary, Europe’s biggest political force faces accusations that it represents an out-of-date politics.

“The EPP chooses a candidate who campaigned for V. Orban a few months ago. Despite the risks of violating the founding values of the Union by Hungary,” Loiseau said, citing Budapest’s attacks on press freedom and the judiciary.

But Donald Tusk, the Pole who chairs summits of EU leaders, also sought to show that the EPP may not tolerate Orban much longer.

“If you support [Russian President Vladimir] Putin and attack Ukraine, if you are in favor of the aggressor and against the victim, you are not a Christian Democrat,” he said of Orban’s friendly ties with Moscow and tensions with Kiev.

By Robin Emmott and Philip Blenkinsop