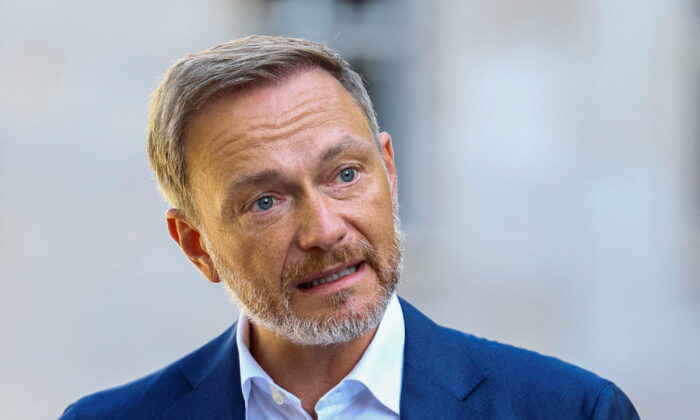 BERLIN—The economic situation is deteriorating and the outlook is fragile in Germany, Europe’s largest economy, its finance minister said on Wednesday, defending his plans to raise income tax thresholds in response to soaring inflation.

The German economy stagnated in the second quarter, with the war in Ukraine, soaring energy prices, the pandemic, and supply disruptions bringing it to the edge of a downturn. Inflation is running at 8.5 percent.

“The economic perspective of our country has become fragile,” Finance Minister Christian Lindner of the liberal Free Democrats (FDP) said as politicians from the ruling coalition’s larger parties took aim at his draft “inflation adjustment law.”

“The economy is deteriorating,” he told reporters in Berlin.

Presenting his plans, Lindner argued that if the government did nothing, 48 million people would be hit by 10 billion euros ($10.2 billion) in effective tax hikes from Jan. 1 next year due to rising inflation.

Lindner wants to avert “secret tax rises” with his plan, which he said would give relief to the “broad middle of society.”

A spokesperson for Chancellor Olaf Scholz spoke of his “goodwill” for Lindner’s initiative, adding: “The concept that Mr. Lindner presented today is part of a larger overall concept that needs to be discussed and developed in the next few weeks.”

The plans have already been criticized by members of the two larger parties in the coalition government, Scholz’s Social Democrats (SPD) and the ecologist Greens.

“The proposed increases in the basic tax-free allowance and child benefit go in the right direction, but are not enough,” Post said, suggesting direct payments instead to provide targeted relief to small- and medium-income households.

The broad three-way coalition, which took office last December, is a first at national level and strains have also emerged between the partners over Scholz’s leadership on the Ukraine crisis.