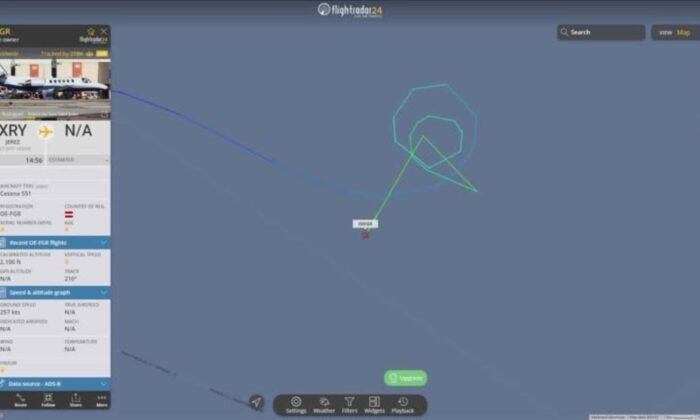 A screenshot showing the flight track of a Cessna plane off the coast of Latvia near Swedish island of Gotland. (Flightradar24.com via Reuters)
Europe

German Businessman on Private Jet That Crashed in Baltic

RIGA—A prominent German businessman was aboard the private jet that crashed into the Baltic Sea off Latvia after flying half way across Europe from Spain without responding to controllers’ calls, his company, Quick Air, said on Monday.

The jet, an Austria-registered Cessna 551, left Jerez in southern Spain on Sunday afternoon, turning at Paris and Cologne before flying straight out to the Baltic Sea, where it spiraled into the water off the Latvian coast, flight tracking data showed.

“I can confirm that it was the private jet of our owner, Karl-Peter Griesemann,” said a spokesperson for Quick Air, an air charter company based in Cologne. Griesemann and three others were on board the plane, the spokesperson added.

Cologne newspaper Express reported that Griesemann was the pilot and that he was accompanied by his wife, daughter, and his daughter’s boyfriend.

The cause of the crash is not yet known.

Spain’s air traffic control service ENAIRE said it lost contact with the aircraft in airspace above Toledo at 1455 local time (1255 GMT), an hour after it took off. It alerted controllers in France, and two warplanes were sent up to monitor the jet.

Aircraft from several countries and a passenger ferry headed to the crash site on Sunday evening to aid the rescue operation.

A wreck, a concentrated patch of waste, and an oil-like slick had been spotted near the crash site, Latvian search and rescue head Peteris Subbota told Latvian television, adding no passengers had been found.

German and Danish warplanes were sent up to observe the aircraft as it flew over northern Europe on Sunday afternoon but were unable to spot anybody on board.

Griesemann has been a prominent figure in Cologne, the largest city in western Germany, playing a role in the deeply Catholic city’s annual carnival celebrations.