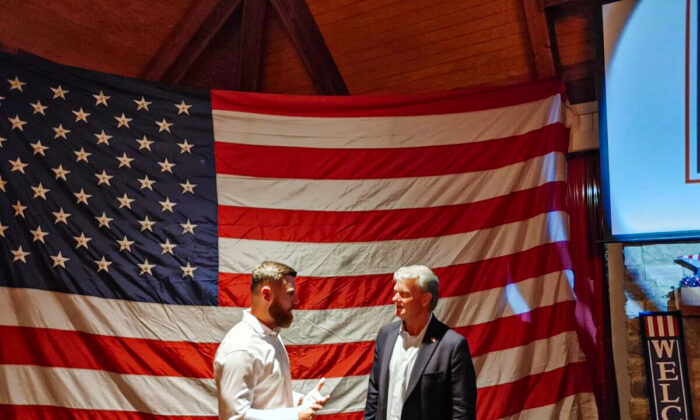 Every race is crucial for both parties, as House Republicans are striving to net five seats in the 435-member chamber to regain the majority they lost in 2018.

In suburban Atlanta’s 7th Congressional District, Mark Gonsalves easily prevailed over Michael Corbin after finishing second to Corbin in the May 24 primary.

The 2nd District saw a similar finish in the runoff as Chris West topped Jeremy Hunt, after Hunt was the top vote-getter on May 24 and West placed second.

All those races were overshadowed by the 10th District, where trucking company owner Mike Collins, who is endorsed by Georgia’s Republican Gov. Brian Kemp, routed Trump-supported Vernon Jones, a former Democrat who calls himself the “black Donald Trump.”

At The Social Goat Tavern in the heart of historic downtown Covington, supporters of Jones gathered as results for the 10th District’s GOP runoff streamed in around 8 p.m.

The numbers weren’t favorable for the candidate, who gained national attention when, as a Democratic Georgia state representative, he publicly endorsed Trump in 2020.

Jones, who switched to the GOP in 2021, secured a stamp of approval from Trump in the race to fill the seat vacated by Rep. Jody Hice (R-Ga.) when he decided to run against incumbent Republican Secretary of State Brad Raffensperger.

Jones finished second to Collins in the May 24 primary, advancing to the June 21 runoff, but it was evident from the moment the initial results were posted that Jones’s bid to earn the Republican nomination in the heavily red district would fall short.

About 25 miles south, in Jackson, the mood at The Brickery was livelier.

Collins, who was born and raised in the Butts County seat, celebrated with friends, family members, and supporters, as a sprawling American flag that flew at his trucking company adorned one wall near a sign that featured his grandfather’s motto, “Can’t never could.”

Georgia’s 10th District is a conservative stronghold that includes 18 counties ranging from the outskirts of metropolitan Atlanta to the South Carolina line.

In the May 24 primary, Collins gained 25.6 percent of the vote while Jones finished second with 21.6 percent in a field of eight candidates. On June 21, Collins received 74.6 percent. He will face Tabitha Johnson-Green in the general election on Nov. 8. Green defeated Jessica Fore in the Democratic primary.

The origins of why the 10th District race became nationally prominent can be traced back to 2020, when Jones was a Georgia Democratic state representative who publicly endorsed Trump for reelection.

Shunned by fellow Democrats, Jones switched to the GOP at an event in Washington on Jan. 6, 2021, hours before the U.S. Capitol breach. He initially ran against Kemp in the GOP gubernatorial primary until he dropped out at Trump’s urging so former Sen. David Perdue could have a clearer path to victory.

Perdue lost to Kemp by around 50 points in the May 24 primary, while Jones finished second to Collins in the 10th District primary, leading to a runoff, since Collins didn’t surpass the required 50 percent of the vote.

On June 20, Trump released a recorded message to voters in the district saying that Jones has “proven time and time again he’s with the MAGA movement.”

Collins received the backing of all six primary candidates who didn’t advance to the runoff, along with Kemp. He’s the son of the late former Republican Congressman Mac Collins.

At multiple campaign stops, Collins called himself “unapologetically pro-Trump, an ‘America First’ agenda candidate, [and] conservative to the core.”

At his watch party in Jackson, the town he’s called home his entire life, Collins talked about his family’s multigenerational roots in Butts County and the 10th District, and how his small-town roots and trucking industry background reflect the “work ethic” he will take to Washington if he wins in November.

That led to another business supplying concrete for construction, which included trucks delivering concrete and dump trucks hauling sand and gravel.

‘Strong and Not Afraid’

Collins Trucking landed a contract with pulp and paper giant Georgia-Pacific to transport pine and hardwood logs to various mills in Georgia, which it still does today.

Mike Collins was raised in the family business and eventually created Collins Industries, which transports building products and now owns the group of companies.

“His daddy was a wonderful man,” Jackson resident Willie Norsworthy said at The Brickery on June 21.

“[Mike Collins] is a man we trust, and he is not afraid to stand up for American values. With what the left is doing to this country, we need someone who is strong and not afraid.”

Collins barely lost to Hice in the 2014 GOP congressional primary. He eventually became chair of the Butts County Republican Party and helped other candidates to get elected.

When Hice announced he was running for secretary of state, Collins entered a crowded field.

“I thought Jody would be in there until the cows came home,” Collins told The Epoch Times at his watch party.

“My dad told me it is important that people trust you and like you. This is not just a job for me. This is my home. These are good people, some I’ve known all my life. We need representatives in Washington who are firm on protecting the ‘America First’ platform and saving it from more damage from [President Joe] Biden.”

Collins said that he walked “six to seven miles a day” knocking on doors in neighborhoods and towns across the district for several months.

“I know this district. We deliver to all of the towns and have for years,” Collins said. “I know the people and they know me. I owe it to the people to take the time to listen to them.”

In the May 24 Republican primary, Hunt tallied 37 percent of the ballots, with West in second place at 30 percent.

In the general election, West will oppose Rep. Sanford Bishop (D-Ga.), who first took office in 1993. Bishop received 93 percent of the vote in the May 24 Democratic primary.

In another runoff on June 21, Gonsalves defeated Corbin in a landslide to secure the Republican nomination for the 7th District.

Gonsalves received 70 percent of the vote followed by Corbin at 30 percent. He will face Rep. Lucy McBath (D-Ga.) in the general election.

Corbin led a five-candidate field with 41.2 percent of the vote in the May 24 primary. Gonsalves finished second at 27.3 percent.

Two of the congressional runoffs featured races where candidates were accused of being “carpetbaggers,” which is historically a term used by Southerners to describe Northerners who moved to Southern states for their own political, financial, and/or social gain.

In the 2nd District race, West charged that Hunt was a carpetbagger hand-selected by outsiders to challenge Bishop, the entrenched Democratic incumbent.

The 28-year-old Hunt is a Fox News commentator who left Yale Law School and moved to Columbus, Georgia, to enter the race. Hunt registered to vote in Muscogee County in February, according to voting records from the Georgia secretary of state’s office.

Born and raised in south Georgia, the 38-year-old West earned a bachelor’s degree and master’s degree at Valdosta State University in southern Georgia before completing his law degree.

In a statement after the May 24 primary, West said, “We advanced to this runoff despite being outspent 11–1 by Jeremy Hunt and his Washington, D.C., lobbyists and special interest donors who flooded this district with their crony, carpetbagging money.”

Voters of middle and southwest Georgia “know a phony campaign when they see one,” West added.

In the 10th District, Collins said in a February tweet about Jones: “The voters of GA10 don’t want a corrupt, carpetbagging, lifelong Democrat from DeKalb County. They want a pro-Trump, America First fighter who’s lived, worked, and raised a family in the district—it’s why we’re going to win.”

In a June 20 tweet, Collins invited guests to attend his watch party in Jackson and added: “Everyone welcome. Except Democrats. Democrats are meeting over at the other guy’s event, just outside the 10th District of course.”

The “other guy’s event” referred to Jones’s watch party in Covington, which is part of Georgia’s 4th District.

Though Jones and Evans lost in landslides, Trump still prevailed as Collins and McCormick are staunch supporters of the former president’s “America First” platform.

Georgia has posed a problem for Trump, as five of six Republican primary candidates he has backed in the state have lost.

Only Herschel Walker and state Sen. Burt Jones prevailed in races for the U.S. Senate and lieutenant governor, respectively.

Jones and Evans extensively promoted the Trump endorsement during their campaigns.

While Trump was outspoken in his support of Jones throughout the primary and leading up to the runoff, the former president was passively involved with his backing of Evans.

Trump’s political action committee gave Evans around $10,000. Trump spoke at a tele-rally for Evans on June 20.

Collins, at his watch party on June 21, reinforced his commitment to a pro-Trump agenda..

“We’re going to fight for energy independence, and we’re going to get the federal government out of your way.”

Leading up to the runoff, Collins told Henry County Republicans that they should vote for him “if [they’re] looking for somebody that is truly, unapologetically pro-Trump, an ‘America First’ agenda candidate, conservative to the core, [and] an outsider [who’s] never been elected [to] anything in [his] life.”

“We want to make sure this nation turns out to be the same nation that gave [us] the amazing opportunities that we’ve had for centuries now—that people continue to come here for those unique opportunities that only exist in America,” McCormick said.

“That’s what we’re fighting for.”