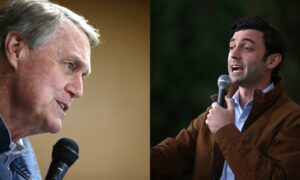 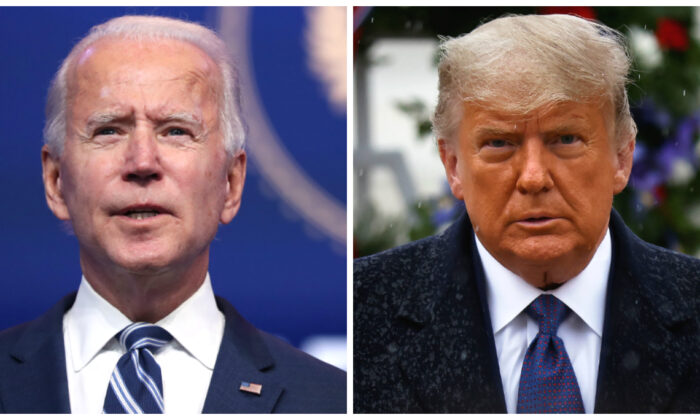 Democratic presidential nominee Joe Biden addresses the media at the Queen Theater in Wilmington, Del., on Nov. 10, 2020. (Joe Raedle/Getty Images); (Right) President Donald Trump turns after placing a wreath at the Tomb of the Unknown Solider as he attends a Veterans Day observance in the rain at Arlington National Cemetery in Arlington, Va., on Nov. 11, 2020. (Carlos Barria/Reuters)
Georgia

Georgia Recount Uncovers 2,600 Uncounted Ballots in One County, Most for Trump

Thousands of ballots were not tabulated in a Georgia county during the normal vote counting process, state officials announced Monday night.

The 2,600 uncounted ballots in Floyd County were mostly for President Donald Trump. The new discovery cuts Democratic presidential nominee Joe Biden’s lead in the state by about 800 votes.

The ballots weren’t counted because officials in the county did not upload them on Election Night, Gabriel Sterling, who manages the state’s election system for Secretary of State Brad Raffensperger, told reporters during a virtual press conference.

“This is why you do the audits. There’s no issues with any of the equipment or anything, they just didn’t scan these ballots, it looks like, or the card was not put through properly,” he said.

“So the secretary says this is such an amazing blunder.”

Raffensperger wants Floyd County’s elections director to step down because of what happened, according to Sterling, “because this was too important of an issue to have allowed to happen this way.”

Dr. Tom Rees, chairman of the county’s Board of Elections, told The Epoch Times via email that “We are trying to reconcile our hand count with our election day results.”

“We have narrowed the problem to our one advance voting location and are focusing on that. The hand count went very well and I am certain that it is accurate,” he added.

A request for comment sent to the Floyd County Board of Commissioners wasn’t returned.

The Trump campaign said in a statement, “By not counting these ballots, the State of Georgia incorrectly tilted its election results towards Joe Biden and hurt President Trump.”

“Georgia officials must continue with their recount efforts to ensure that the American people know the true outcome of the 2020 presidential election, and the Georgia recount must include a thorough matching of signatures. The State of Georgia must not certify its results until the recount is done accurately and the results are correct,” it added.

The Floyd County Republican Party said in a statement that the county “deserves better.”

“This cannot happen, ever,” it said.

No similar situations have arisen so far during Georgia’s recount, which was ordered because the margin between Trump and Biden, with what officials said was all ballots counted, was smaller than 1 percent.

According to the unofficial count, Biden leads Trump by just over 14,000 votes, or 0.28 percent. That was before the uncounted ballots were found.

Officials are looking into a reported water leak in Fulton County that halted the counting of mail-in ballots on Election Day and are also probing why officials there appear to have asked poll observers to leave.

David Shafer, the head of Georgia’s GOP, has repeatedly said officials in Fulton County asked poll observers to leave on election night only to continue counting ballots “in secret.”

Fulton County also had to re-scan ballots last week because of an issue related to reporting on the vote counting that was conducted.

Even with the snafu that was discovered on Monday, Sterling said the Biden win will probably not change.

“We have no reason to believe that anything is coming to a point where it looks like it was really a substantive change in the outcome,” he said. “The Floyd County situation was unfortunate. It was you know, bad management practice. They just—we haven’t investigated to get to the bottom of what exactly happened. But that doesn’t seem to be replicated anywhere else that we’ve seen so far.”