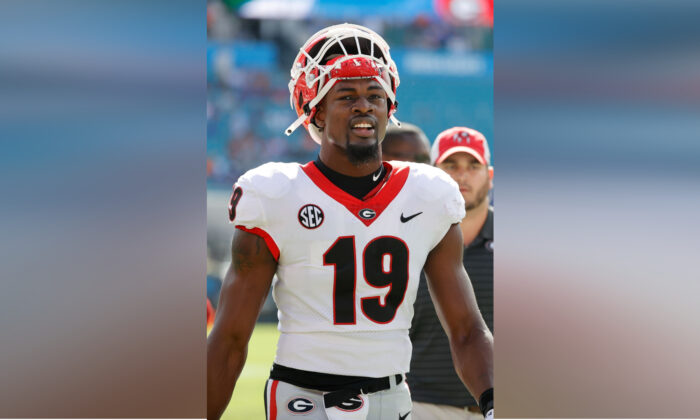 Georgia Bulldogs linebacker Adam Anderson (19) prior to the game against the Florida Gators at TIAA Bank Field in Jacksonville, Fla., on Oct 30, 2021. (Kim Klement-USA TODAY Sports via Reuters)
Crime and Incidents

Georgia linebacker Adam Anderson was charged with rape on Wednesday evening after voluntarily turning himself in to the Athens-Clarke County Police in Georgia, his attorney announced.

Anderson was being held without bond.

Lawyer Steve Sadow said in a statement: “Adam is innocent of the charge brought against him and intends to vigorously defend himself in court. He will seek release on bond. Once again, Adam hopes and prays that the UGA community and the public keep an open mind, and afford him the presumption of innocence that the law demands.”

According to the police report, a 21-year-old woman went to a house in the early morning hours of Oct. 29, had some drinks and later awoke to find Anderson raping her. She reported the alleged incident to police later that day, the same day Anderson and the Bulldogs left Athens to head to Jacksonville, Fla., where they opposed Florida on Oct. 30.

Anderson played against the Gators, a game top-ranked Georgia won 34–7. He was suspended from the team last week, with Bulldogs coach Kirby Smart saying the school would “cooperate fully with all law enforcement and campus protocols.”

Anderson, a senior, leads the team with five sacks this season and has 32 tackles.

Prior to the allegation, Anderson was viewed as a potential first-round pick in the 2022 NFL Draft by ESPN and CBS Sports.