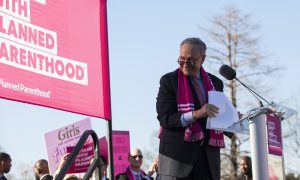 The full Georgia House of Representatives passed a bill to ban abortions after an unborn baby’s heartbeat is detected, a day after a House panel passed the legislation and the same day the Tennessee House passed a similar bill.

The legislation will now move to the Georgia Senate.

The bill says “Modern medical science … demonstrates that early infants in the womb are a class of living, distinct human beings that, among other individual human traits, have their own distinct blood types, organ systems, and unique fingerprints,” among other traits.

The abortion bill just passed the House. We’ll have more in this 11. pic.twitter.com/MzBg04tfIo

Current Georgia law allows abortions up to 20 weeks; if passed, the so-called heartbeat bill would ban abortions when a fetal heartbeat was detected, which typically happens in a the sixth week of pregnancy.

Exceptions are included if not getting an abortion would pose substantial and irreversible physical harm to the prospective mother or in the case of rape or incest.

The bill passed late Thursday with a vote of 93-73.

Gov. Brian Kemp praised the passage in a press conference after it passed.

‘This is a huge step, but we have more work to do in the Senate.’ Governor Brian Kemp on the passage of House Bill 481. The abortion legislation known as the “heartbeat bill” bans abortions starting around 6 weeks, when a heartbeat can be detected. #gapol #GPBLawmakera #HB481 pic.twitter.com/q6CWV4ZjiF

“Georgia is a state that values life. We shield the vulnerable and shelter the innocent. I applaud the Heath and Human Services Committee for advancing legislation to protect the unborn. I encourage the House and Senate to do the same. This is a powerful moment in Georgia. It’s bigger than politics and partisanship. Let’s champion life today and ensure that all Georgians – including the unborn – have the chance to live, grow, and prosper. Thank you, and God Bless.” – Governor Brian P. Kemp #HB481 #gapol

“This is a huge step but we have more work to do in the Senate and I look forward to working with them to get where I can sign this legislation,” he said.

He told the Atlanta Journal-Constitution that passing the legislation would help preserve life and noted he and many Republicans were voted into office in part because they promised to pass restrictive abortion measures.

“I campaigned on signing the toughest abortion bill in the country, and this is the toughest one we’ve got in the Legislature now,” he said.

Rep. Ed Setzler, a Republican, was among those speaking in support of the bill on the House floor.

Some Democrats walked out of the House during the presentation of the “Heartbeat Bill,” a bill that would effectively ban abortions in Georgia. We’ll have more at 11. pic.twitter.com/EKD5xf4pVx

“It shouldn’t be a partisan issue that a child in the womb should be worthy of full legal protection,” he said.

“It seeks to recognize that the child in the womb that is living distinct[ly] from their mother has a right of life that is worthy of protection,” Seltzer added, reported WSB-TV.

As he spoke, some Democratic lawmakers turned their backs on him. Some later walked out before the vote was conducted.

“There’s an overwhelming majority, so they are not listening to people. It’s not just us,” said state Rep. Bee Nguyen, a Democrat.

Other polls have shown more support for abortion restrictions, with 49 percent of respondents saying abortion should be illegal in all or most cases in 2014, according to the Pew Research Forum.

Nationwide, the debate on abortion has focused on late-term abortions, fueling a shift for some Americans from pro-abortion to pro-life, according to a poll released in January.