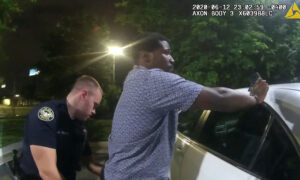 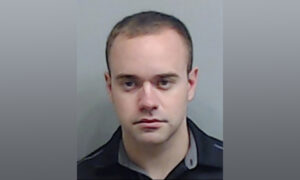 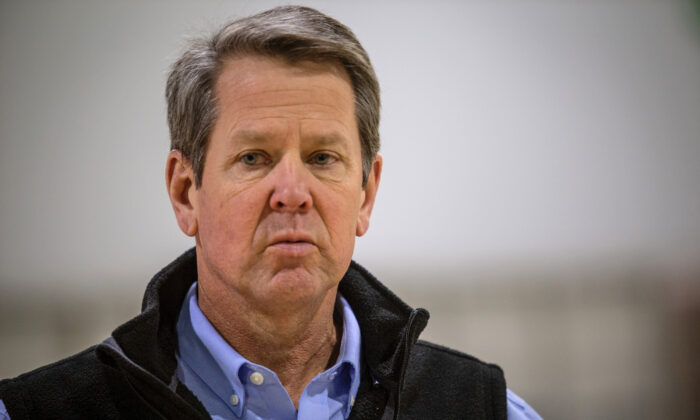 Georgia Gov. Brian Kemp listens to a question from the press during a tour of a temporary hospital at the Georgia World Congress Center in Atlanta on April 16, 2020. (Ron Harris/AP Photo)
US News

Up to 1,000 National Guard troops will be deployed to Atlanta following weeks of unrest after the fatal police-involved killing of Rayshard Brooks, culminating in an especially violent Fourth of July weekend.

Georgia Gov. Brian Kemp signed an order declaring a state of emergency on July 6, authorizing the deployment of the troops.

He argued that the troops are needed to protect state buildings, including the state capitol, the Department of Public Safety headquarters, the governor’s mansion, and the Georgia World Congress Center. He said these troops will free up state troopers from those locations to patrol the streets of Atlanta.

“Peaceful protests were hijacked by criminals with a dangerous, destructive agenda. Now, innocent Georgians are being targeted, shot, and left for dead,” Kemp said in a statement on July 6. “This lawlessness must be stopped and order restored in our capital city.”

Kemp said that as a result, he declared an emergency “because the safety of our citizens comes first,” adding that it will “allow troops to protect state property and dispatch state law enforcement officers to patrol our streets. ”

“Enough with the tough talk,” the Republican governor said. “We must protect the lives and livelihoods of all Georgians.”

Across Atlanta over the Fourth of July weekend, 31 people were shot and five people died, including an 8-year-old girl. The Georgia State Patrol headquarters were also vandalized by protesters over the same time period, according to local media reports.

“They were armed with bricks, landscaping bricks, Molotov cocktails, fireworks. Their one mission was to destruct property and that is exactly what they did,” Lt. Stephanie L. Stallings, spokesperson for the Georgia Department of Public Safety, told WSB-TV, adding that between 60 and 100 vandals dressed in dark clothing came to the headquarters in the early-morning hours to cause havoc.

“Well, now we’re demanding action for Secoriea Turner and for all of the other people who were shot in Atlanta last night and over the past few weeks because the reality is this—these aren’t police officers shooting people on the streets of Atlanta, these are members of the community shooting each other,” she told reporters on July 6.

“If you want people to take us seriously and you don’t want us to lose this movement, then we can’t lose each other,” the mayor said, adding that “you can’t blame this on a police officer, you can’t say this is about criminal justice reform.”

“This is about some people carrying some weapons who shot up a car with an 8-year-old baby in the car.”