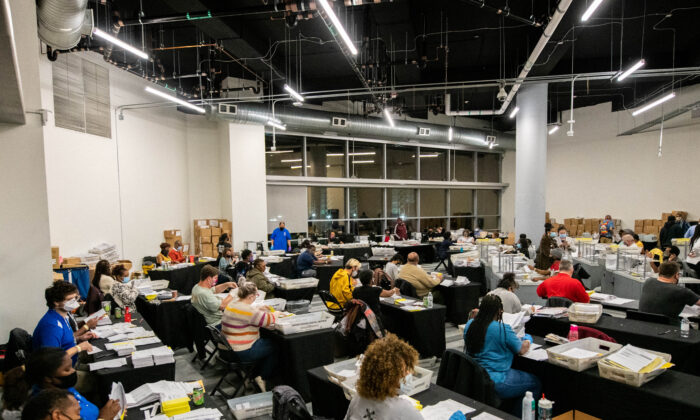 Employees of the Fulton County Board of Registration and Elections process ballots in Atlanta, Ga., on Nov. 4, 2020. (Brandon Bell/Reuters)
By Zachary Stieber

Georgia’s election board this week referred 35 cases of voter fraud for prosecution.

“Election fraud is not tolerated in Georgia. When there is evidence of it, the people responsible face prosecution,” Secretary of State Brad Raffensperger, chairman of the five-member board, said in a statement.

“Georgia has multiple safeguards in place that allow our team of investigators to discover fraudulent voting. They worked to catch the wrongdoing in these cases, and they maintain the security of Georgia elections,” the Republican added.

The cases include four instances where authorities say convicted felons voted or registered to vote and four other cases of non-citizens voting or registering to do so.

Authorities also said a group called the New Georgia Project submitted 1,268 voter registration applications after a deadline, causing voters to be disenfranchised in a 2019 special election.

In a statement emailed to The Epoch Times, the project’s CEO Nsé Ufot said: “The February 10th State Election Board meeting was the first time NGP heard about the allegations regarding NGP’s important voter registration work from 2019. We have not received any information on this matter from the Secretary or any other Georgia official so we will have no further comment on the investigation.”

Raffensperger said last year that the project was one of several groups that sent letters to people living outside the state in possible violation of Georgia law. The group, which says it fights for voter rights and was founded by former Democrat gubernatorial nominee Stacey Abrams. The group ran into trouble before, when it failed to pay unemployment insurance, according to state records.

During an appearance on MSNBC last week, Ufot said: “The idea that there is rampant voter fraud is insane. It is a part of Republican fan fiction.”

Authorities are also accusing Floyd Jones and the Fayette County Board of Elections and Voter Registration, where he was director at the time, of improperly handling four memory cards registering 2,760 votes in the Nov. 3, 2020 general election. The board didn’t immediately respond to a request for comment.

Fayette County was one of four where officials found uncounted votes during a recount. Some 2,755 votes were were uncovered in a memory card that were not included in the initial count, Raffensperger’s office has said.

Another notable case involves an Atlanta woman, Samunta Pittman, who allegedly submitted 70 false voter registration applications while canvassing for the Coalition for the People’s Agenda. The coalition didn’t respond to an inquiry.

Two other individuals also allegedly submitted one false voter registration application each while a third is accused of voting in another person’s name.