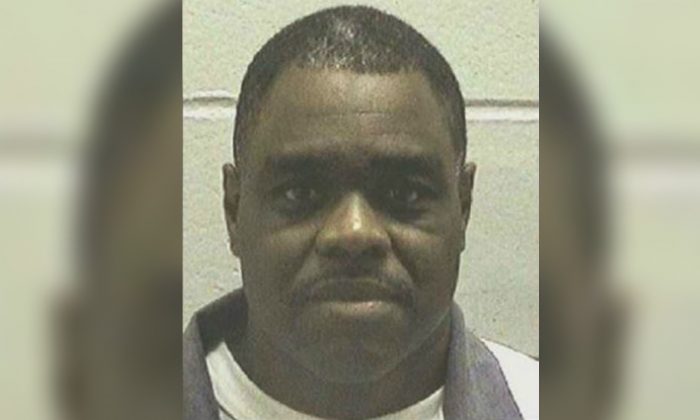 Scotty Garnell Morrow is seen in custody. (Georgia Department of Corrections via AP)
By Tom Ozimek

A man who killed his ex-girlfriend and another woman over two decades ago has been put to death in Georgia via lethal injection.

Scotty Garnell Morrow was 52 at the time of his May 2 execution at a state prison in Jackson.

According to WSB-TV, Morrow requested a last meal of a hamburger with mayonnaise, two chicken and waffle meals, a pint of butter pecan ice cream, a bag of buttered popcorn, two all-beef franks, and a large lemonade.

Moments before he was executed, Morrow apologized to the family of his murdered victims and to a woman he also shot, but who survived.

Strapped to a gurney before he received a lethal injection of the sedative pentobarbital, Morrow said, “I would like to give my most deepest and sincere apologies to the Woods family and the Young family,” adding that he hopes they can find peace.

Morrow was the first inmate put to death in Georgia this year. His execution came shortly after the U.S. Supreme Court rejected a last-hour bid to block the death sentence from being carried out.

Morrow was convicted of murder in the shooting deaths of his ex-girlfriend Barbara Ann Young and her friend Tonya Woods at Young’s Gainesville home in December 1994.

LaToya Horne, who was shot in the face and arm, survived the attack.

Young had broken up with Morrow after the two had been dating for about six months due to his abusive behavior.

The spurned Morrow went to Young’s house on Dec. 29 apparently to try to persuade her to continue their relationship.

An argument ensued, in which Morrow shot and killed the two women and severely wounded the third.

Young’s 5-year-old son, hiding in a nearby bedroom, saw Morrow fatally shoot his mother in the head.

Morrow was convicted on two counts of malice murder, among other charges, in June 1999.

The State Board of Pardons and Paroles, the only authority in Georgia that can commute a death sentence, rejected Morrow’s request for clemency following a closed-door hearing Wednesday.

Warden Benjamin Ford told witnesses at Morrow’s execution that 9:38 p.m. was his approximate time of death.