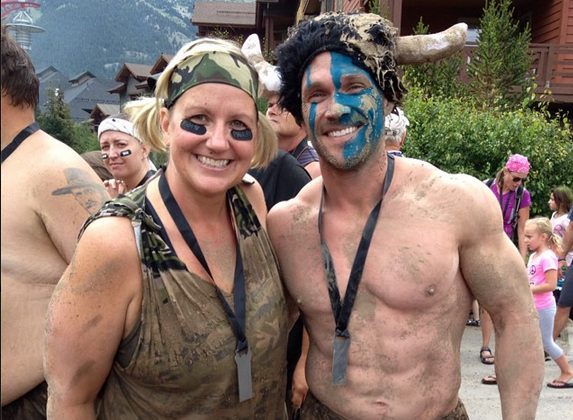 Extreme Weight Loss is featuring a Tulsa, Oklahoma mother on the episode on July 22.

Georgeanna Johnson, 44, has for the past 20 years taken care of her husband, a local pastor, and their two daughters.

“Often referred to as ‘Martha Stewart’ by her family and friends, for whom Georgeanna bakes, decorates, sews and crafts, she neglected taking care of herself and is now more than 150 pounds overweight. Georgeanna will take on the challenge of losing half her body weight during her year-long transformation ,” according to ABC.

“Georgeanna was a competitive gymnast and cheerleader in high school who vowed to do a back handspring every year on her birthday until she turned 60. At her current weight of 315 pounds, however, that feat is impossible–Georgeanna is also a perfectionist who is terrified of being judged and falling short, no matter what the task or challenge.”

Now, with her grown daughters having moved out of the house, she wants to set a better example for herself and the people she counsels at church — so she wrote a letter to trainer and transformation specialist Chris Powell asking for help.”

Chris’ wife Heidi will try to help Georgeanna revive her dreams of being a gymnast, along with former Olympic champions Nadia Comaneci and Mary Lou Retton. They’ll try to train Georgeanna for a huge challenge: performing a balance beam and floor routine in front of dozens of people.

Dominique Dawes, Shannon Miller, Mary Lou Retton, and Nadia Comaneci also appear on the episode. Georgeanna was excited of meeting some of her idols.

“One of the best moments of this year was meeting my idols! Nadia Comaneci was so sweet and humble. I burst into tears when I met her. She’s the reason I wanted to do gymnastics when I was a kid. And meeting Mary Lou was incredible!” she said.

“We are almost the same age, and when I was a teenager I thought if I could just meet her I know we could be friends! Haha. I never thought I actually would. And I was right! We hit it right off, never stopped talking and had such a fun day. Excited for you all to see the time I spent with them!”

Celebrity chef Rocco DiSpirito also appears in the episode to teach Georgeanna how to satisfy her sweet tooth with healthy ice cream.

Chris said on Facebook on Tuesday night that people will be witnessing “one of the craziest transformations you’ll ever see.”

“You’re not going to believe she’s the same person after you watch tonight!” he added.