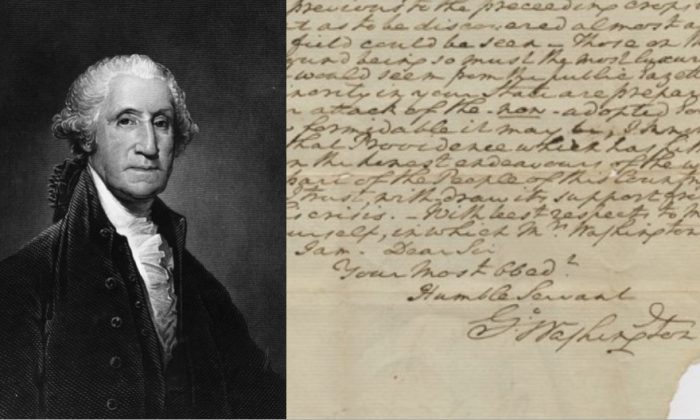 George Washington Letter on God and the Constitution Revealed

A unique letter written by George Washington that makes reference to God and the Constitution is up for sale after spending decades in a private collection.

The remarkable piece of correspondence is expected to fetch in excess of $100,000.

The Raab Collection, a dealer in historical documents, called the artifact in a news release on Feb. 11, “a remarkable original letter signed by George Washington praising the providence of God for the ratification of the Constitution, the founding moment in American democracy.”

“Raab is not aware of any other letter of Washington casting divine  influence on the passage of the Constitution having reached the market,” the release states.

America’s first President makes a remarkable statement in the letter, according to Nathan Raab, President of the Raab Collection, with Washington writing that “his victory in battle and his stewardship over the Convention that led to our Constitution came with the guiding influence of a higher power.”

“This letter has been in a private collection for decades and is valued at $140,000,” writes the Raab Collection.

A Challenge to the Constitution

Washington signed the letter Sept. 7, 1788. He addressed it to Richard Peters, speaker of the Pennsylvania General Assembly, and a former member of the Continental Congress.

In the document, Washington praises God for the ratification of the U.S. Constitution, which had been drafted in Philadelphia a year earlier.

Washington’s letter was written at a time when the Constitution faced a stiff challenge. Representatives of some states even wanted to hold a second convention to possibly rewrite it, according to a note on the Raab Collection website.

“This ‘second convention’ movement was a real threat,” the Raab Collection noted. “Several states were attempting to organize them. Only Pennsylvania succeeded. They were also strong in Virginia and Massachusetts. Nothing ever came of them but it was not a given and Pennsylvania’s early September meeting gave Washington reason to be concerned.”

In his letter to Peters, Washington expressed hope that divine providence would see proponents of the Constitution withstand the challenge.

“It would seem from the public Gazettes that the Minority in your State are preparing for another attack of the—now—adopted Government; how formidable it may be; I know not,” Washington wrote. “But that Providence which has hitherto smiled on the honest endeavors of the well-meaning part of the People of this Country will not, I trust, withdraw its support from them at this crisis.”

The Raab Collection news release notes that Washington’s use of the term “Providence” signifies “Divine Providence,” citing Mount Vernon, George Washington’s home. The release adds that Mount Vernon has indicated his theological beliefs as follows: “It is clear that he believed in a Creator God of some manner, and seemingly one that was also active in the universe. This God had three main traits; he was wise, inscrutable, and irresistible. Washington referred to this God by many names, but most often by the name of ‘Providence.’”

What Else Is In the Letter?

Washington dedicates most of the letter to a discussion of his experiences and tribulations in agriculture.

The letter reads, in part, “I was sorry to hear from the above letter that the crops of wheat in the lower parts of your state were indifferent. The cause assigned for it, aided by the uncommonly wet spring, produced the same effect with us. Is it to the difference of climate—our continental situation—that added changes in the temperature of the air—or to the different modes of cultivating the land, that the wheat in this country, more than in England, is so apt to be injured by the winter?”

“I do not know what cause to attribute it, but my plants of scarcity have not answered (fully) my expectations—probably from improper management; for the leaves never having never grown to the size I have been taught to expect, have not, I presume, been often enough pulled.”

The letter concludes with a profound statement of conviction that America’s founding was guided by a divine hand.

The auther then signs off with a cordial, “With best respects to Mrs. Peters & yourself, in which Mrs. Washington joins me, I am, dear Sir, your most overt. Humble servant. G. Washington.”

Washington was sworn in as President on April 30, 1789, less than a year after penning the missive.