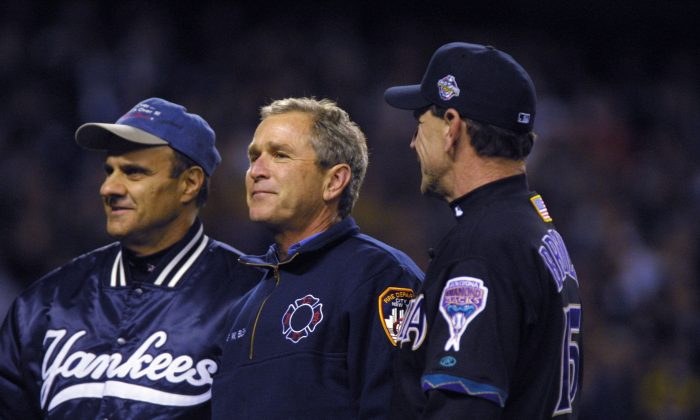 President George W. Bush talks with managers Joe Torre #6 of the New York Yankees and Bob Brenly #15 of the Arizona Diamondbacks before game 3 of the World Series at Yankee Stadium in New York, New York. Yankees win, 2-1 over the Diamondbacks. (Al Bello/ALLSPORT)
Baseball

The George W. Bush Library and Museum exhibit, located in Dallas, takes visitors on a chronological tour of the presidents and their historical connection to baseball. This special exhibit includes artifacts (over 125) from other presidential libraries and museums and the National Baseball Museum in Cooperstown, New York as it relates to America’s favorite pastime.

At various times baseball has always seemed to reflect those events in America’s history as it relates to social, economic, and racial overtones. In moments good or bad, concerning events that may be painful or joy filled, baseball has always been there for the people. The game has united us, given us hope and helped to salve the wounds of discomfort. The game has changed as fans have changed. Always for the better it seems. But most importantly, baseball has given us hope and provided a portal for a better understanding of tomorrow.

Below are some of the more interesting roles that American presidents had in the historical development and growth of the game that can be discovered at the exhibit.

George Washington (1789-1807). Our first president was also our first Commander and Chief. In the winter of 1776-1777 at Valley Forge, Pennsylvania to keep his men from freezing and thinking about their hunger, he played catch with them.

Abraham Lincoln (1861-1865). Played catch with his two youngest sons and built a baseball field behind the White House. He would lose his 11-year-old son Willie in 1862 from typhoid fever, which always seemed to plague the capitol. His youngest son, Tad, and the President would continue to “play ball” until Lincoln’s death in the spring of 1865. Tad died in 1871. Mary Todd Lincoln would later be committed to a sanatorium by the oldest son, Robert.

Benjamin Harrison (1889-1893). First president to attend a professional baseball game—the Washington Senators vs. Philadelphia Athletics. He served as a Union Brigadier General during the Civil War. He was the grandson of our 9th president William Henry Harrison, who was elected in 1840, but died in office after serving only 32 days.

Grover Cleveland (1885-1889). This president didn’t like baseball very much. Refused to attend any games saying the American people did not want him wasting his time watching baseball. Cleveland fathered a child out of wedlock, so the American people voted for Harrison against him for reelection in 1884. Cleveland apologized and took financial responsibility for the child. He was elected again in 1893, serving until 1897. I was surprised he didn’t like baseball. Even more surprising is the fact that a President would admit a wrong, apologize, then do the right thing.

Howard Taft (1909-1913). Threw out the “First Pitch” in 1910, starting a tradition. Also Taft was a big man weighing over three hundred pounds. Once at a game, the small wooden chair became uncomfortable for his bulk, so he stood to stretch. This was done in the middle of the 7th inning. Thus the “7th inning stretch.” There is some disagreement among baseball historians about this being the first time there was a “stretch,” but the Bush Library states it as a fact. Taft would be defeated in the 1912 election by Woodrow Wilson. Taft would later become a justice on the US Supreme Court. He is buried in Arlington Cemetery.

Woodrow Wilson (1913-1921). Never attended a baseball game saying he didn’t feel right watching entertainment while American boys were dying in combat. After Wilson’s return from Europe after the war, he had a massive stroke. His wife was his caregiver. She wouldn’t allow anyone to have access to the president. Historians feel like she probably ran the country. It’s not surprising that Wilson didn’t like baseball. At that time it was considered the common man’s game. Wilson had been the President of Princeton University and Governor of New Jersey.

Herbert Hoover (1929-1933). The first president to attend several World Series games from 1929-1932. He attended games and encouraged the people to go, in order help get their minds off The Great Depression.

Franklin D. Roosevelt (1933-1945) didn’t throw out “The First Pitch,” nor did Harry Truman (1945-1953) because both felt it was inappropriate to do so during war. But 6 days after Japan surrendered on September 2, 1945, Truman threw out a ceremonial “First Pitch,” to show the American people the war was over and they could return to a life of normalcy.

Ronald Reagan (1981-1989). President Reagan loved and played baseball. One of his first jobs was doing play-by-play of baseball games for a radio station. He wasn’t really at the game, but took the information about the game off the wire service and then relayed that information about the game to the audience as though he was really there. He had a record he would play that had applause and cheering indicating fans at the park. A wooden plank struck against a table indicated a hit. A really loud hit indicated a home run. One day the tape broke from the server. Reagan kept announcing “Foul ball,” until he could get it fixed. The audience never knew the difference.

George H.W. Bush (1989-1993) President Bush played first base and was team captain at Yale University. He led his team and the university to their first World series in 1947. Bush always kept a glove in the Oval Office desk, and hoped against hope he would maybe be called up to “The Big Show.” The close relationship between himself and his son George W. Bush (2001-2009) was reflected in their shared love for the game.

When George W. was a little boy, he played Little League Ball in Midland, Texas. When he became president he held an annual T-Ball event on the south lawn of the White House. He was an avid baseball card collector. You can see his card collection at the exhibit. Young George would take a baseball card, glue it to a stamped post card, and write “Please sign,” on the card with the address on the other side. He would then place the card in a letter and mail it. One exhibit shows the returned cards signed by Mickey Mantle, Rocky Colavito, and Don Larsen. Plus a ticket stub of a Texas Ranger game in the 1990’s when George was managing general partner/principal owner. The Bush family usually sat behind the Ranger dugout near the front. The price for that prime seat was $5.

On October 30, 2001, following the 9/11 terrorist attack, President George W. Bush stepped on the mound at Yankee Stadium and delivered a perfect strike before Game 3 of the World Series between the New York Yankees and Arizona Diamondbacks.

I remember being so proud of my president and my country that day. Yankee fans exploded with thunderous applause and cheers. Before the game Bush practiced pitching. Yankee Dereck Jeter was on hand to give him some pointers. The last thing Jeter said was, “Don’t bounce it. If you do they will boo you.” Well our president didn’t and neither did America. The exhibit has a film of these events, plus a more expanded version over in the museum itself.

Through its baseball exhibit the museum displays related documents and artifacts that tell just how important baseball was and is in the development of America. The “First Pitch” and other dramatic moments are depicted throughout this new and exciting exhibit. But you had better hurry if you want to view it. The exhibit will only run through October 4, 2015.