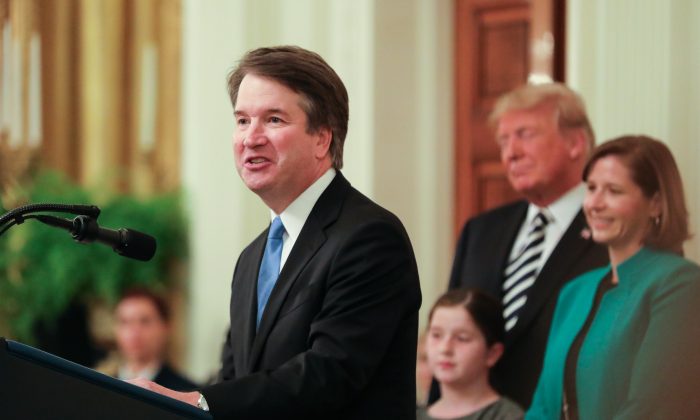 Brett Kavanaugh speaks after being sworn-in as associate justice of the Supreme Court at the White House in Washington on Oct. 8, 2018. (Holly Kellum/The Epoch Times)
US News

The president of George Mason University has reaffirmed the school’s decision to hire Supreme Court Justice Brett Kavanaugh to teach a summer job in England after some students tried to pressure the school to reverse their decision.

During a two-hour town hall, president Angel Cabrera told students that while he acknowledged that some of them disagreed with the administration’s move, the decision was final. Kavanaugh has a three-year teaching contract with the university.

“Even if the outcome is painful, what’s at stake is very, very important for the integrity of the university,” Cabrera said, according to HuffPost.

About a dozen students participated in the April 16 town hall where Cabrera and other school officials took preapproved questions from students.

The student protests against Kavanaugh’s summer job came amid a lobbying effort backed by Brian Fallon, Clinton’s 2016 campaign press secretary, to remove him.

Provost S. David Wu said it was the law school’s choice to hire Kavanaugh. He said he saw “no reason for university administrators to override” their decision. Cabrera agreed with Wu and emphasized the need to protect the school’s ability to hire who they deem fit, HuffPost reported.

Cabrera told students that in the end, it’s still up to the school.

“Even if in this particular case the outcome is one that you deeply disagree with, the process by which these decisions are made and the reason why we are so firm in defending them is actually essential to the way a university like ours operates,” Cabrera said.

The school president’s reaffirmation echoed a previous statement he made last month when he stated that the school was standing by its decision and would not remove Kavanaugh.

“I respect the views of people who disagreed with Justice Kavanaugh’s Senate confirmation due to questions raised about his sexual conduct in high school. But he was confirmed and is now a sitting Justice,” Cabrera said at the time.

Fallon is leading a liberal advocacy group dubbed Demand Justice “that aims to influence the political leanings of America’s courts” by opposing conservative nominees. According to his LinkedIn account, Fallon is the executive director of the group.

Demand Justice is running an advertising campaign on Facebook to target students at the university in order to pressure the school to remove Kavanaugh from his teaching job.

He is also a former aide to President Barack Obama’s attorney general, Eric Holder, and Senate Minority Leader Chuck Schumer (D-N.Y.), according to his Twitter profile.

“Demand Justice will run digital ads on Facebook targeted specifically at people with a connection to the Virginia university,” a report on their website stated.

The advertisements ask students to sign a Change.org petition that calls for the school to “Terminate AND void ALL contracts and affiliation with Brett Kavanaugh at George Mason University.”

The petition also calls for, among other demands, a “formal apology” from the administration, a public release of all documents relating to the hiring, and to hold a town hall to discuss Kavanaugh’s hiring and the implications for students.

Demand Justice is a project of advocacy organization group “Sixteen Thirty Fund” that uses its funds to provide grants to progressive organizations, according to Influence Watch. The practice of giving such grants, where the donors are anonymous, is known as “dark money.” The group acts mainly through media campaigns that are either against or for a judicial nominee.