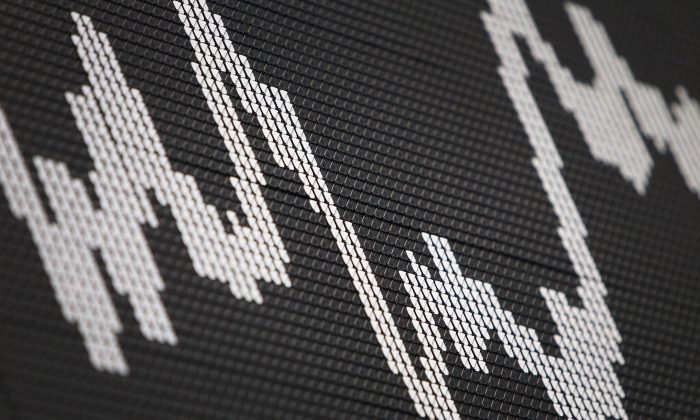 A board displays the German index DAX at the German stock exchange in Frankfurt, western Germany, on June 26, 2014. (Daniel Roland/AFP/Getty Images)
Business & Economy

Ongoing geopolitical threats in a number of hotspots around the world are taking their toll on economies, more so in Europe than in North America, and investors’ behavior is becoming more cautious as confidence wanes.

Market moves in the observation period are not all doom and gloom, however, as U.S. equity markets rebounded when Ukraine jitters temporarily subsided. But data has generally continued to show improvement in the U.S. macro economy amid belief that the U.S. Federal Reserve is still a long way from raising key interest rates.

The situation in Europe, on the other hand, is worsening. German consumer confidence (ZEW index) reached its lowest level since late 2012. This result is closely tied to the uncertainty caused by the geopolitical tensions and economic sanctions imposed on Russia by the West.

Should the picture worsen and inflation expectations fall, the European Central Bank could be pressed into action faster. The ECB did not alter its monetary policy stance on Aug. 7 at its rate-setting meeting, as expected.

However, president Mario Draghi did say, “We have intensified preparatory work related to outright purchases in the asset-backed securities market to enhance the functioning of the monetary policy transmission mechanism.”

This impending Eurozone “quantitative easing” would be the next “big bazooka” in the ECB’s arsenal.

Draghi, who has pointed to past strength of the euro as being a challenge for the Eurozone recovery, noted that the Eurozone and the U.S. are on divergent paths for monetary policy and that the fundamental case for a weaker euro is much better.

As mentioned in last week’s commentary, the German bund’s 10-year yield hit a record low on Aug. 6 of 1.10 percent. It fell further during this observation period, closing at 1.03 percent. In an environment of heightened geopolitical concerns, a flight-to-safety bond rally often takes place, and German bonds are perceived to be a safe place to store money, albeit at record low yields.

Canadian markets were relatively quiet, as is usually the case. The TSX gained slightly while bond yields were close to unchanged. Consumer confidence fell to a seven-week low as Canadians became less “bullish” on the economy and the real estate market.

Friday, Aug. 15, is going to be a busy day for economic data in Canada, with Statistics Canada’s release of a revised July jobs number along with some sales and real estate readings that are scheduled for release.

Their erroneous figure of 200 jobs created in July, released a week earlier, was disappointing. News of a revision caused a mild temporary strengthening of the Canadian dollar and a rise in bond yields, as if the market is expecting a much better number on Friday. We’ll see.

Bank of America Merrill Lynch’s monthly global fund manager survey is a good gauge of how institutional investors are reacting. Cash holdings have risen to their highest level since June 2012 (5.1 percent). In addition, geopolitics was stated by 86 percent of respondents as being the top threat to financial stability. This percentage has dramatically increased in the last three months and is one reason for the ongoing flight-to-safety rally in U.S. treasuries.

The environment of low interest rates caused by extraordinary central bank measures over the past few years has created a search for higher-yielding assets. U.S. high-yield bonds are one such asset class that has benefited, but now talk of a “bubble” is manifesting, with Reuters reporting that investors are fleeing the market at a record pace in July and early August.

“The outflows from junk [high-yield] bond funds, which were the biggest since Lipper records began in 1992, underscore growing investor concerns of stretched valuations in the securities after the sector’s multi-year rally,” according to an Aug. 12 Reuters article.

We’ve seen during this observation period how the market seems to react almost in lockstep with geopolitical flare-ups, with Europe (Germany) naturally being more affected than North America. One can only hope for a prompt resolution and that policymakers and central banks don’t need to adjust their plans to compensate for economic weakness due to geopolitics.