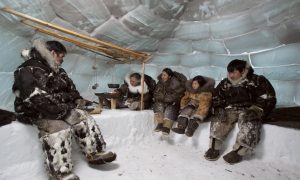 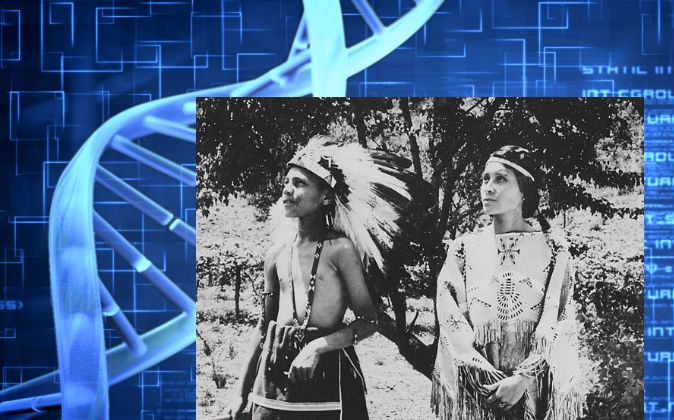 A Cherokee boy and girl stand in costume on a North Carolina reservation in 1939. (Wikimedia Commons, background image of DNA via Thinkstock)
Beyond Science

The idea that Native Americans are descended from ancient Jews, Egyptians, or Greeks has been a controversial one for hundreds of years. James Adair, an 18th century settler who traded with Native Americans for 40 years, wrote that their language, customs, and social structures were similar to those of the Israelites.

He wrote in his book “The History of the American Indians”: “It is a very difficult thing to divest ourselves, not to say, other persons, of prejudices and favourite opinions, and I expect to be censured by some for opposing commonly received sentiments, or for meddling with a dispute agitated among the learned ever since the first discovery of America.”

In more recent years, similar observations by Dr. Donald Panther-Yates have even met with what Yates described as “hate mail” from indigenous studies professors.

It is commonly held that Native Americans descended from Mongolians. In 2013, a study published in the journal Nature acknowledged that some ancient European ancestry is possible. The DNA from a 24,000-year-old corpse in Siberia was analyzed. It showed no resemblance to Asian populations, only to European, yet it showed a clear connection to Native Americans. But the mainstream scientific community is far from embracing the theory that Native Americans descended from ancient Middle-Eastern or Greek peoples as Yates and some others have proposed.

Yates is of Cherokee descent, he has a Ph.D. in classical studies, and he founded the genetics research institution DNA Consultants. These three credentials have given him a unique perspective on Native American history as it relates to these ancient cultures, and how DNA testing can support the theoretical link.

Native Americans are generally thought to fit into five genetic groups, known as haplotypes, each named by a letter of the alphabet: A,B,C,D, and X.

Yates demonstrated in a paper titled “Anomalous Mitochondrial DNA Lineages in the Cherokee,” what he calls the fallacy behind many genetic analyses: “[The geneticists say] ‘Lineage A, B, C, D, and X are American Indian. Therefore, all American Indians are lineage A, B, C, D, and X.’ The fallacy in such reasoning is apparent. It could be restated as: ‘All men are two-legged creatures; therefore since the skeleton we dug up has two legs, it is human.’ It might be a kangaroo.”

Any divergence from the expected haplotypes is usually attributed to an intermingling of races after European colonization, not to the genes that came with Native Americans from their origin.

After analyzing Cherokee DNA, Yates concluded, “No such mix could have resulted from post-1492 European gene flow into the Cherokee Nation.”

“So where do our non-European, non-Indian-appearing elements come from?” he asked. “The level of haplogroup T in the Cherokee (26.9 percent) approximates the percentage for Egypt (25 percent), one of the only lands where T attains a major position among the various mitochondrial lineages.”

Yates focused on haplotype X for “its relative absence in Mongolia and Siberia and a recently proven center of diffusion in Lebanon and Israel.”

Though much of the Cherokee culture has been lost, noted Yates in his book “Cherokee Clans,” what can still be discovered about the legends hints at ancestors who came across the sea and whose language was similar to ancient Greek. Some linguistic parallels have also been drawn between the Native American languages and Egyptian and Hebrew.

The Cherokee’s white demigod Maui may have his roots in a Libyan leader of a fleet dispatched by the pharaoh Ptolemy III before 230 B.C., Yates explained. “Maui” is similar to the Egyptian words for “guide” or “navigator.” Maui was said to have brought all civilized arts and crafts. He gave the Cherokee their title for principal chief, Amatoyhi or Moytoy, said Yates, which translates as “mariner” or “admiral.”

He recounted a Cherokee Twister Clan legend that named Maui’s father as Tanoa. Yates said Tanoa may refer to a Greek. “Tanoa was the father of all fair-haired children and came from a land called Atia,” he wrote.

Atia may refer to Attica, a historical region encompassing the Greek capital, Athens. Atia was said to be a place “full of high alabaster temples,” one of which “was very spacious, and was built as a meeting-place for gods and men.” At this place, one found sporting competitions, games, feasts to the gods, meetings of great chiefs, and the origin of wars that caused people to spread over the Pacific.

“One could hardly invent a more fitting folk memory of Greek culture,” Yates wrote. “The Hawaiian word that epitomized this lost world is karioi, ‘leisure, ease,’ literally the same word in Greek for ‘amusements.'” Yates notes numerous other linguistic similarities.

“According to the Keetoowah Society elders, the Cherokee once spoke a non-Indian language akin to Hopi, but gave it up and adopted Mohawk to continue to live with the Iroquois. The ‘old tongue’ seems to have many elements of Greek, the language of Ptolemaic Egypt and ancient Judeans,” he said.

As in Hebrew, Native American nouns have neither cases nor declensions, wrote Adair. Another similarity is the lack of comparative or superlative degrees. “There is not, perhaps, any one language or speech, except the Hebrew and the Indian American, which has not a great many prepositions. The Indians, like the Hebrews, have none in separate and express words. They are forced to join certain characters to words, in order to supply that great deficit,” he wrote.

A Perspective From the Past

Adair offers a perspective on the culture Yates cannot. Adair interacted extensively with the Native Americans hundreds of years ago, while their traditions were still thriving. Of course, the extent to which he may have misunderstood that culture as an outsider must be taken into account.

“From the most exact observations I could make in the long time I traded among the Indian Americans, I was forced to believe them lineally descended from the Israelites, either while they were a maritime power, or soon after the general captivity, the latter however is the most probable,” Adair wrote.

They had a similar tribe organization, he said. Their manner of delimiting time was similar, as was their custom of having a most holy place, and their designation of prophets and high-priests.

He gave an example of a similar custom: “Correspondent to the Mosaic law of women’s purification after travel, the Indian women absent themselves from their husbands and all public company, for a considerable time.”

Could Ancient Greek Myths Hint at Contact With South America?

He explained the absence of circumcision among Native Americans thus: “The Israelites were but forty years in the wilderness, and would not have renewed the painful act of circumcision, only that Joshua inforced it; and by the necessary fatigues and difficulties, to which as already hinted, the primitive Americans must be exposed at their first arrival in this vast and extensive wilderness, it is likely they forbore circumcision, upon the divine principle extended to their supposed predecessors in the wilderness, of not accepting sacrifice at the expense of mercy. This might soothe them afterwards to wholly to reject it as a needless duty, especially if any of the eastern heathens accompanied them in their travels in quest of freedom.”

It seems the Cherokee people have had mixed feelings about Yates’s work. While the Central Band of Cherokee website has posted a summary of Yates’s research, some online comments indicate that some Cherokee have been reluctant to stand behind such claims or to involve themselves in the controversy.

In writing about the Cherokee Paint Clan, Yates stated: “Some of them practiced Judaism, although United Keetoowah [a Cherokee organization] elders vehemently deny this.”