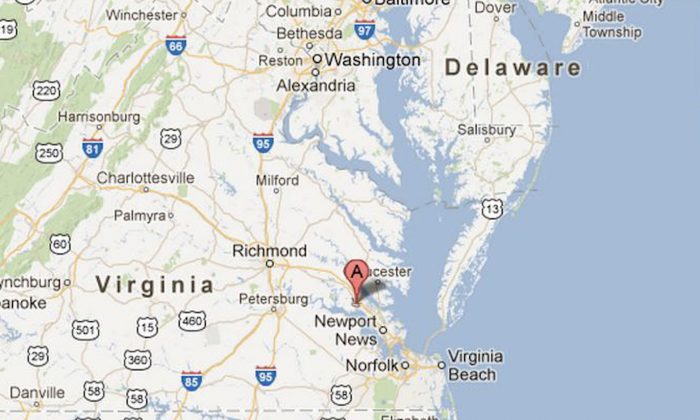 A Google Maps view of Williamsburg, Va., near where Maj. Gen. Joseph Brown and his wife, Susan Brown, died in a plane crash April 19, 2013. (Screenshot via The Epoch Times)
US

Maj. Gen. Joseph Brown, 54, and his wife Susan Brown, 52, died in a plane crash near Williamsburg, Va. The cause of the crash is under investigation.

The single-engine Cessna 210 that Brown was piloting crashed near a retirement community.

“Another 50 feet, and they would have been in my bedroom,” a resident Bruce Ward told WVEC-TV.

“The fellow next door came knocking on our door, and he says, ‘You got a fire extinguisher? There’s a plane just crashed next to your house,'” Ward said.

The crash occurred at 4:53 p.m. on April 19 near the Williamsburg-Jamestown Airport, Virginia State Police spokeswoman Corinne Geller told Fox News. The couple’s dog was also aboard and died in the crash.

Air Force Secretary Michael Donley and Chief of Staff Gen. Mark Welsh released a joint statement, according to the Air Force Times: “We are deeply saddened by the loss of Joe Brown and his wife, Sue. Our thoughts and prayers are with their family, friends, and the members of the National Defense University as they come to terms with the tragedy. Joe and Sue dedicated their lives in service to our nation and their loss will be felt across our Air Force and joint team.”

Brown once served as commander of Ellsworth Air Force Base. He has received more than a dozen awards and commendations, including the NATO Meritorious Service Medal, the Legion of Merit and the Bronze Star.

Recently, Brown was commandant of the Dwight D. Eisenhower School for National Security and Resource Strategy at the National Defense University.