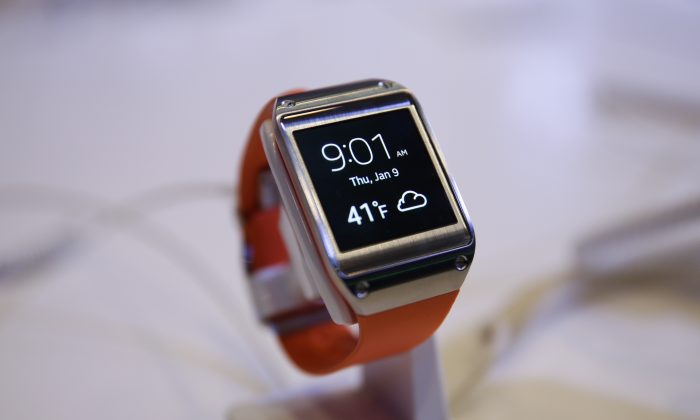 Samsung’s upcoming “wearable” tech could be even curvier than its predecessors.

The Samsung Gear 3, or Gear 2 Solo, will allegedly have a “very pronounced curve,” much more than the slightly curved Gear Fit, according to PocketNow.

The Gear 3, which is slated to be Samsung’s sixth “wearable” tech after the Galaxy Gear, Gear 2, Gear 2 Neo, Gear Life, and Gear Fit, will also have an AMOLED screen that is more on the rectangular side, with thin side bezels.

Other possible features include a rectangular home button like those found on Samsung’s smartphones and other devices, a cellular radio, and will run on the Tizen operating system instead of Android Wear. The watch won’t feature a camera, though.

PocketNow notes that the Gear 3 should be out in September, around the time of the IFA electronics fair in Berlin, Germany.

NEW YORK (AP) — Barnes & Noble and Samsung unveiled a new reading-focused tablet that will replace the bookseller’s own Nook tablets.

The move had been expected since Barnes & Noble said in June it would team up with Samsung to release co-branded Nook tablets in August.

For the first time, the Nook will have a camera. The 1.3 megapixel camera on the front is on par with what’s on other tablets, but the 3.0 megapixel rear one isn’t as sharp.

The Nook offers access to both the Nook app store and Google’s Play store for Android apps — the latter unavailable in previous Nook tablets.

The New York company spent years investing in its Nook e-book reader and e-book library, but they struggled to be profitable. And in December the chain said it was evaluating the future of its tablets. Still it offered a new non-tablet e-book reader during the holiday season.

In an interview, Barnes & Noble CEO Mike Huseby said Nook tablets hadn’t done well in the past because they weren’t full-featured. This one, he said, has a camera and other features expected in Android tablets, while offering additional ones targeted at readers.

While it’s possible to install a Nook app on most Android tablets, the Nook tablet goes further in offering a home screen with quick links to favorites and recently read books. You can pause reading to check email or Facebook, then hit a book icon on the corner of the home screen to instantly resume your book.

Amazon’s Kindle Fire tablets also emphasize reading, alongside shopping, movies and other Amazon services. They have had more success than Nooks.

Huseby said Barnes & Noble has the advantage of having more than 600 stores where customers can come in to check out the products before buying and return for tutorials and other help.

“Amazon doesn’t have them,” he said. “You can call them on the phone or chat online, but they don’t have a store in which you can get a human contact and expert bookseller.”

B&N has been trying to turn itself around as competition from discount stores and online retailers toughens, and as consumers shift away from traditional books to digital formats.

Barnes & Noble says it will continue to make and sell its $99 Nook GlowLight e-readers.

In July, Barnes & Noble said it would separate the Nook and retail businesses. The retail business includes bookstores and the BN.com website and has been outperforming the Nook unit. Nook Media, whose investors include software company Microsoft Corp. and educational book publisher Pearson Inc., houses the digital and college businesses of Barnes & Noble.

The company expects the separation to be complete by April 2015.