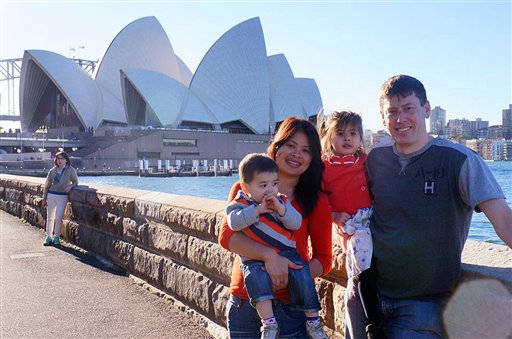 In this undated photo provided by the Rhodes family, Phoumalaysy Rhodes, second left, and her husband Gavin Rhodes, right, hold their children Manfred and Jadesuda, second right, near the Sydney Opera House in Sydney, Australia. The four are among 49 passengers and crew believed killed when a Lao Airlines plane crashed on Wednesday, Oct. 16, 2013, en route from the Lao capital Vientiane to Pakse in the Southeast Asian nation’s south. (AP Photo/Rhodes Family)
Asia & Pacific

Australian Gavin Rhodes and his wife and two children are dead after a plane crash in Laos.

Rhodes and his family were on a 3-week vacation, which he expressed his excitement for on Twitter before the trip.

He told a friend that they would be in Laos until the 31st before spending three days in Bangkok . Then they planned to travel back to Sydney, where he works as a tax agent.

Rhodes posted several Instagram photos of his children after they had arrived in Laos.

Rhodes was with his wife Phoumalaysy, known as Lea, and his young daughter and son.

In a statement, other members of the Rhodes family asked the press to “respect their privacy at this difficult time”.

“We will not be providing comment or information. Any interview requests will be declined.”

“Am absolutely devastated! Just found out my friend @Gav_Rhodes and family has died in a plane crash!” said one.

“R.I.P. You made us laugh and were so supportive. We will miss you!”

The Lao transport ministry statement said the crash is being investigated and the airline hoped to announce its findings on Thursday.

The plane crashed into the Meking River on Wednesday afternoon.