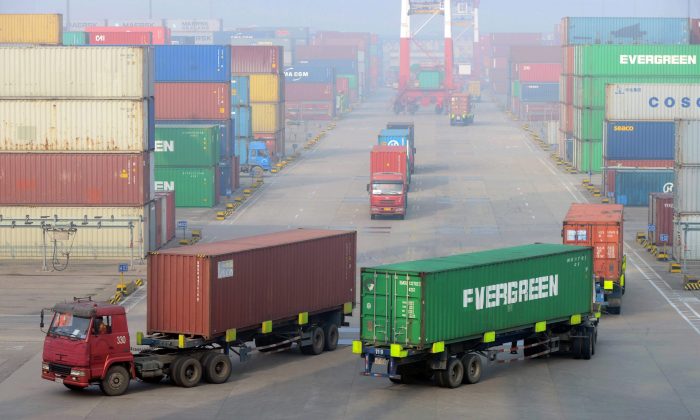 Cargo trucks drive through a container pool at a seaport in Qingdao in eastern China's Shandong province in this file photo. Canada aims to do more business with China amid a rising wave of protectionism. (Chinatopix via AP)
Business

While protectionist sentiment is on the rise, Canadian businesses are being encouraged to do more with China, which appears to be in stark contrast to the message U.S. businesses are getting from the incoming Trump administration.

The experience of U.S. businesses in China is worsening. The Canadian government and businesses have to be clear on their objectives in dealing with China in order to succeed, as well as be wary and able to recognize when Chinese actions are not necessarily of long-term Canadian benefit, according to Paul Frazer, president of PD Frazer Associates and a Washington-based government affairs consultant on Canada-U.S. relations.

“I don’t think that what Mr. Trump does with China will necessarily spill over negatively to what Canada would like to do with China,” Frazer said in a telephone interview. Frazer has previously served as minister of public affairs at the Canadian Embassy in Washington, as the consulate general in New York, and in Prague as ambassador to the Czech Republic and Slovakia.

But Frazer seems to hold some skepticism about what Canada is trying to accomplish with China. “I’m not sure we have a clear picture of what Canada wants to do with China yet either, or how it’s going to go about trying to achieve specific objectives.”

Frazer has advocated for the Canadian government to blaze its own trail and not simply ride the coattails of the United States in international relations.

Canadian businesses realize that its biggest growth opportunities lie in China; however, the biggest challenge has been the ease with which it can do business in the United States, said Frazer. The United States has the infrastructure, rule of law, and transparency that China doesn’t.

“Working with China is a much heavier lift, as you can imagine,” Frazer said.

The rise of the protectionist spectre is not new and “Buy America” isn’t something that has just emerged recently, Frazer said. “It goes back many years and every time it’s proved to be harmful.”

With supply chains deeply integrated across Canada, the United States, Mexico, and globally, the worry is the knee-jerk reaction to stronger calls to embed “Buy America” wherever it can be done. How that could trigger responses of a similar nature in other parts of the world, which can signal a downward spiral of increased protectionism, is something nobody wants to see, said Frazer. This would seriously threaten jobs in both Canada and the United States.

Canadian businesses have been saying that regulations and trade barriers are already hurting export growth, according to the Bank of Canada’s Business Outlook Survey released Jan. 9. “The perception of rising protectionism leads a number of businesses to maintain or build a foreign presence,” the BoC stated.

China won’t be accustomed to dealing with the likes of Trump and this could make it more eager to do business with Canada, albeit on a much smaller scale.

“Where the Canadians will have to be careful is to recognize where they may be taken advantage of, where they’re more a pawn in a bigger game,” said Frazer.

At next week’s World Economic Forum meeting in Davos, Switzerland, China will be front and centre with a “larger-than-ever” delegation headed by president Xi Jinping, “underscoring China’s determination to assume a global leadership role as other major powers are hobbled by domestic infighting,” according to a Bloomberg report. The U.S. presence will be minimal by historical standards.

Canada is in a vulnerable position due to its dependence on exports. The economy has been in the doldrums since late 2014 due to weak commodity prices and flagging export growth.

With the rising cost of production in China, investors may start looking elsewhere the longer it takes to establish greater transparency in regulations and the rule of law.

Some German and U.S. companies believe protectionist sentiment is rising in China. The German automakers have to use local partners to manufacture cars in China.

The most recent American Chamber of Commerce survey, conducted earlier this year, showed that regulatory obstacles are forcing a small portion of U.S. companies to move activities away from China. Eighty-three percent of tech, industrial, and natural resource sector companies are the most downbeat on Beijing’s attitude toward foreign companies. U.S. businesses in China were less profitable in China in 2015 as compared to 2014.

A good deal of uncertainty faces Canadian businesses, which are in a wait-and-see mode, according to a Bloomberg interview with John Manley, president and CEO of the Business Council of Canada.

As Trump’s inauguration approaches, the focus is turning to how the administration will function.

Getting things done is not a slam dunk and the Republican Party is not really united, said Frazer. “It’s papered over at the moment because they have a president who brought them to the dance very successfully,” Frazer said.

He also said that due to the natural tension between the White House and Congress, there could be a rocky patch after Jan. 20 as a number of issues are broached—including health-care reform.

“It’s not a parliamentary system,” Frazer said. “It’s not a prime minister with a majority.

“It’s a president who has to rely on the cooperation, collaboration, and the ability to persuade the folks in Congress to do what he would like to see done.

“And they will push back.”

With additional reporting from Fan Yu