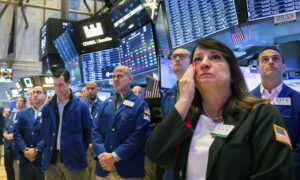 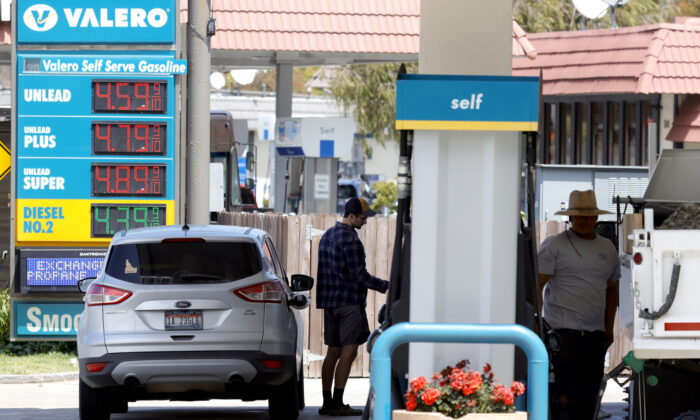 A customer prepares to pump gasoline into his car at a Valero station in Mill Valley, Calif., on July 12, 2021. (Justin Sullivan/Getty Images)
Business & Economy

U.S. gasoline prices have risen to their highest level in seven years even as demand fell for a fourth straight week, with supply disruptions from Hurricane Ida putting upward pressure on prices and keeping seasonal factors from delivering relief at the pump to drivers frustrated by historically high fuel costs.

For the week of Sept. 6, the national average for a gallon of regular gasoline rose to a seven-year high of $3.176 from $3.139 the week prior, according to the U.S. Energy Information Administration (EIA), which projected that hurricane-related supply disruptions in the Gulf of Mexico would continue to pressure prices in the near term.

Retail gasoline prices in the United States averaged $3.16 per gallon in August, the highest monthly average since October 2014, according to the EIA.

Historically, retail gasoline prices have tended to peak in late summer, when people drive more often, with demand softening in the fall.

GasBuddy head petroleum analyst Patrick De Haan said in a tweet on Sept. 12 that the week of Sept. 5 marked the fourth straight week of falling gasoline demand in the United States, which hit the lowest level since the week of June 20.

“Weekly gasoline demand was down 1.6 percent from the prior week and was 3.5 percent below the four-week average,” De Haan wrote.

Still, the EIA expects that falling demand will eventually catch up with prices. According to the agency’s most recent short-term energy outlook, retail gasoline prices are expected to average $3.14 per gallon in September before falling to an average of $2.91 per gallon in the fourth quarter, an encouraging sign for drivers hoping for relief at the pump.

“The expected drop in retail gasoline prices reflects our forecast that gasoline margins will decline from currently elevated levels, both as a result of rising refinery runs as operations return in the first half of September following Hurricane Ida and because of typical seasonality,” the agency wrote in the outlook.

Meanwhile, crude oil prices rose nearly 1 percent on Sept. 13, supported by concerns over shut output in the United States due to damage from the hurricane.

“Oil prices may not have much room to rise in the near term, but at the same time are not expected to crash soon,” Stephen Brennock of broker PVM told Reuters.