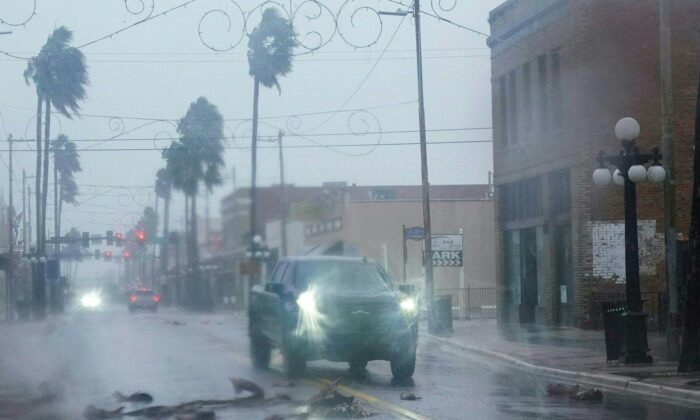 A pickup truck drives around fallen debris and palm trees in the Ybor City neighborhood ahead of Hurricane Ian making landfall in Tampa, Fla., on Sept. 28, 2022. (Bryan R. Smith/AFP via Getty Images)
By Bryan Jung

Gas prices across the United States have risen for ten days in a row, as gas prices hit over $6 a gallon in California.

The price of gas has been rising since Sept. 21, after less than 100 days of declines during the peak summer season.

The national average gas price was at $3.797 a gallon on Sept. 30, up from $3.689 the week before, according to the American Automobile Association (AAA).

The average price a year prior was $3.189, according to AAA.

The full impact of Hurricane Ian on gas prices, which severely hit the Gulf Coast of Florida this week, is still unknown as the remnants of the storm go up the coast into the Carolinas.

About 11 percent of crude oil production in the Gulf of Mexico was shuttered to prevent damage from the hurricane, according to the U.S. Bureau of Safety and Environmental Enforcement.

Oil production has mostly resumed since then, with over 9 percent of production still down, as of Sept. 29.

However, there has definitely been an impact on the Sunshine State.

“Florida gas outages jumping, mainly in the hardest hit areas as people are starting to get back on the roads. 42.0% of stations in Ft. Myers/Naples without gas, 35.3% out in Tampa,” said Patrick De Haan, senior energy analyst at Gas Buddy in a statement.

Gas distribution has been affected in impacted areas in Florida, due to a lack of electricity, as many roads and highways remain flooded, said AAA.

Meanwhile, maintenance issues at several refineries across the country have partially led to a reduction in the national gas supply.

“A slew of unexpected refinery disruptions, including fires and routine maintenance, have seemingly all happened in a short span of time, causing wholesale gas prices to spike in areas of the West Coast, Great Lakes and Plains states,” said De Haan on his blog.

“Some of those areas could see prices spike another 25–75 cents per gallon or more until issues are worked out.”

Prices Up Across America

According to data from the Energy Information Administration (EIA), from the week prior to Sept. 29, demand for gas increased nationwide from 8.32 million barrels a day to 8.83 million, amid tightening supplies and fluctuating oil prices.

“If demand remains robust as supply tightens, drivers should brace for rising pump prices through the weekend,” warned AAA.

The record high for gas prices was $5.016 on June 14, causing headaches for drivers nationwide and a leading factor in pushing up inflation rates.

The U.S. economy technically entered a recession after two quarters of GDP decline, according to the latest revised figures by the Bureau of Economic Analysis, which were released on Sept. 29.

A second round of skyrocketing gas prices would be a blow to the economy and Democrats’ chances in the November mid-terms.

“This is a time for American energy companies to take action to lower prices for consumers and to rebuild inventories of gasoline and diesel in this country that are below the five-year range,” declared Secretary of Energy Jennifer Granholm on Sept. 30.

“I want to add one more warning, a warning to the oil and gas industry executives: Do not—let me repeat, do not—do not use this as an excuse to raise gasoline prices or gouge the American people,” said Biden.

“In an unfolding weather event, our industry is focused on keeping the energy market well-supplied and delivering fuels where they are needed most while ensuring the safety of our workforce,” said a spokesperson for the American Petroleum Institute, the largest trade association which represents the oil and natural gas industry, in a statement.

The spokesperson noted that repeated investigations by federal and state officials have found that market forces have been the cause of gas price hikes and not price rigging from the energy industry.

“Gasoline prices are determined by market forces—not individual companies—and claims that the price at the pump is anything but a function of supply and demand are false.”

Biden has also blamed the rise in gas prices on Russia’s invasion of Ukraine and supply chain bottlenecks, but Republican critics point out that prices have been up since the beginning of his administration.

That led to a multi-state lawsuit, which eventually forced the Biden administration to issue drilling permits again.

Biden also terminated the Keystone XL oil pipeline from Canada into the United States, which would have secured cheap oil to the domestic supply.

Biden later ordered the release of a million barrels per day in March, from the Strategic Petroleum Reserve, in an attempt to increase oil supplies.

He also waived standards on the proportion of ethanol allowed in gas over the summer.

U.S. oil prices account for over 50 percent of what consumers pay at the gas pump.

A recent drop in crude prices had led the Organization of Petroleum Exporting Countries (OPEC) to consider reducing oil production.

OPEC and its allies, including Russia, are expected to announce collective oil production cuts at their next meeting on Oct. 5.