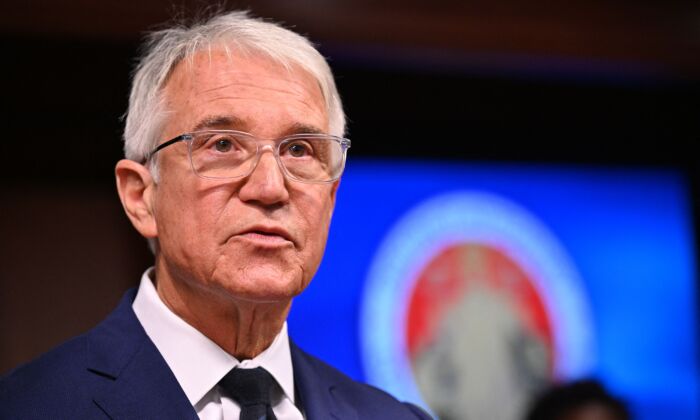 Recall spokesman Tim Lineberger called the results “surprising and disappointing,” in a statement sent to The Epoch Times.

For the over half a million residents that placed valid signatures, Lineberger said, “To deprive them of the opportunity to restore public safety in their own communities is heartbreaking. And to interpret this in any other way other than a wholesale rejection of Gascon’s dangerous policies would be disingenuous, or naive at best.”

“The DA’s primary focus is and has always been keeping us safe and creating a more equitable justice system for all. Today’s announcement does not change that,” she said.

Gascón wrote on Twitter Monday, “Rest assured LA County, the work hasn’t stopped. My primary focus has been & will always be keeping us safe & creating a more equitable justice system for all. I remain strongly committed to that work & to you.”

Recall organizers submitted 715,833 signatures last month to the registrar’s office to force Gascón into a recall election. The county announced Monday that 195,783 of the signatures were invalid.

Over 88,000 were invalidated because the person signing the petition was not a registered voter, and there were nearly 44,000 duplicate signatures, according to the county.

The county’s former district attorney Steve Cooley—who is a member of the recall campaign—sent a letter on Aug. 8 to the Los Angeles Board of Supervisors, alleging that the registrar’s office did not follow proper guidelines when verifying signatures for the campaign during the random sampling last month.

In a random sampling of about 5 percent, or 35,793, of the signatures, the clerk validated about 27,983, which was less than 31,179, the minimum for the recall petition to be automatically validated without full verification.

One of the guidelines, Cooley said, is ensuring that voters’ signatures on the recall petitions match their signatures on file with the registrar’s office.

He said the recall campaign has “strong evidence” to believe the office didn’t follow state guidelines during the random sampling because of “the shockingly large rejection rate,” which was around 22 percent. In the general election in November 2018, the rejection rate of vote-by-mail ballots for non-matching signatures was 2 percent, he said.

Under California law, he said, it is presumed that signatures on election petitions and ballots are matching and valid unless there is a “reasonable doubt” to believe otherwise.

According to Dean Logan, who oversees the county elections office, the verification process is “highly regulated” and follows state guidelines and regulations.

Monday marked the second failure of an effort to recall Gascón. A separate attempt last year was halted by organizers, who blamed poor timing and COVID-19 lockdowns.

Gascón has been under fire since taking office in December 2020, when he issued a series of directives critics blasted as being soft on crime. The directives include a rule against seeking the death penalty, a ban on transferring juvenile defendants to adult court, and prohibitions on filing sentencing enhancements in most cases.

Gascón was previously the DA in San Francisco and was replaced by Chesa Boudin, who was recalled by voters during the June primaries.

In addition, more than 30 cities in the county, including Torrance, Santa Clarita, Lancaster, and Beverly Hills, supported the recall, and more than a dozen passed votes of no confidence against Gascón for his policies.

Gascón has repeatedly defended his methods, saying his stance was well-known during his campaign and his election signified public support of his agenda.