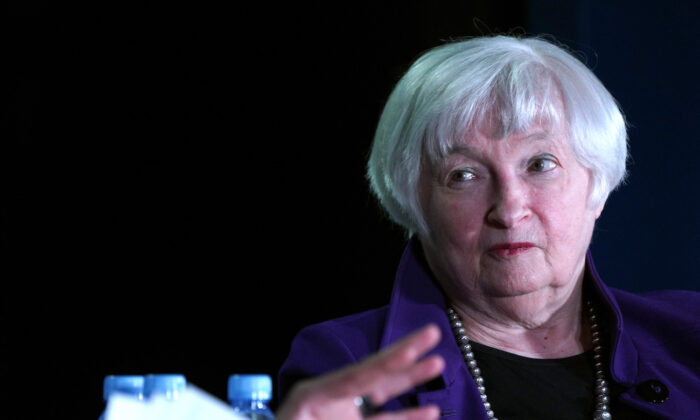 Yellen also said she expected the U.S. economy to “absolutely” slow down amid the Federal Reserve’s rising interest rates, but that there’s “nothing” to suggest the country would face a recession.

She told a New York Times Dealbook D.C. policy forum that gas prices were “unlikely” to fall anytime soon, adding that President Joe Biden had done “what he can do” to try to bring down high gas prices.

Republican lawmakers recently raised concerns over Biden’s plans to release some 260 million barrels of crude oil from the U.S. Strategic Petroleum Reserve (SPR) from November 2021 through October 2022—the largest drawdown from the SPR in history.

Biden in November 2021 announced he would release 50 million barrels of oil from the SPR “to lower prices for Americans and address the mismatch between demand exiting the pandemic and supply.”

Stockpiles in the SPR have fallen to 519.3 million barrels as of June 3. Reuters on May 17 noted that the SPR had dropped to the lowest level since 1987, when the stockpile was at 538 million barrels.

Yellen on Thursday told the economic forum that American households were clearly concerned about soaring gas prices, which played a key role in shaping consumer expectations, but it was “amazing” how pessimistic Americans were about the economy given the fact that the United States now had the strongest labour market since World War II.

Meanwhile, amid reported plans by the Federal Reserve to further increase interest rates in efforts to bring inflation down, Yellen said she saw a “path through this that entails a soft landing” that would avoid a recession, generally defined as negative growth in two consecutive quarters.

The Federal Reserve had raised interest rates by 50 basis points in May, with Federal Reserve Chairman Jerome Powell suggesting in the same month that the bank might resort to similar moves during its June and July meetings. Powell also previously said the central bank would raise interest rates until inflation comes down.

Yellen said she does not see signs of a looming recession, saying on Thursday, “I don’t think we’re [going to] have a recession. Consumer spending is very strong. Investment spending is solid.”

“I know people are very upset and rightly so about inflation, but there’s nothing to suggest that a … recession is in the works,” she added.

Inflation has reached 40-year record highs, signifying an 8.3 percent leap in consumer prices over the past year. The rate has shown signs of moderating but is likely to remain far above the Fed’s 2 percent inflationary target through the end of this year.

Yellen at the start of June said she had been wrong about predicting how inflation would be temporary, however, she said Thursday she would not change any previous U.S. policy decisions.

“Things can always happen that you don’t expect. The world’s very uncertain,” she said.

On June 7, Yellen told Congress that the United States is facing “unacceptable levels of inflation.”

“There’s no question that we have huge inflation pressures, that inflation is really our top economic problem at this point and that it’s critical that we address it. I do expect inflation to remain high, although I very much hope that it will be coming down now,” she told lawmakers at a hearing with the Senate finance committee.

The U.S. Labor Department will be releasing the May consumer price index (CPI) report on Friday.