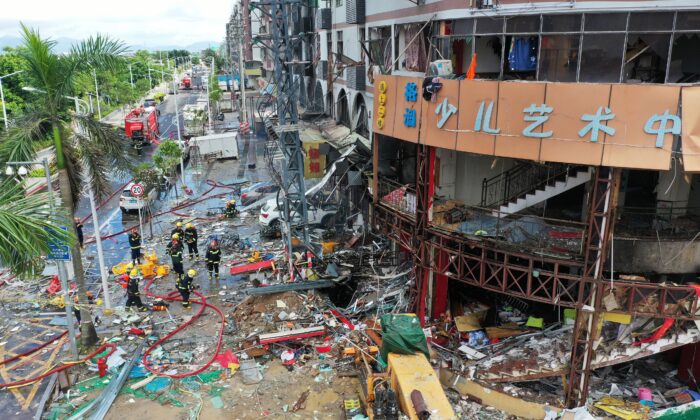 Firefighters work at the scene of a gas pipe explosion in a store in Zhuhai, Guangdong Province, on September 11, 2020. At least three people were injured. (AFP via Getty Images)
Chinese Regime

Gas explosions occur frequently throughout China. The first half of the year saw an average of three per day, according to official data.

In the first six months, 544 gas explosions took place around China, resulting in 71 deaths and 412 injuries, said Sohu, a Beijing-based media, quoting a report released by the Safety Management Committee of the China Gas Association.

Gui Yuan, a current affairs commentator, who lives in Japan, believes the Chinese Communist Party’s (CCP) gas delivery system is to blame for the frequent accidents in China.

“To renovate aging gas pipelines takes many efforts, but the CCP authorities merely want to collect gas fees and gain the benefits,” Gui told The Epoch Times on Nov.12.

In particular, the authorities mandated the “coal-to-gas” policy in 2017, expanding the gas transmission network to rural areas, which has deteriorated the safety of the aged pipeline network.

Although some gas companies intended to start a renovation project, a lengthy approval period with municipalities and various administrative departments dampened their professional ethics. So even though apparent safety risks exist, the companies appear to think a post-accident repair is less troublesome than an overall preventive renovation. “They [the gas companies] are calculating only the cost and not considering the safety of the people,” said Gui.

The price reform is to secure a tight grip on a national network of gas transmission pipelines, and strict regulation over gas distribution prices.

China Petroleum Enterprise Association website on Sept. 22 quoted Guo Haitao, an associate professor at the Institute of Economics and Management of the China University of Petroleum in Beijing, saying that China’s current gas price formation mechanism is still dominated by state control, and that “the market-based pricing mechanism still needs to be improved.”

Gui Yuan believes that the CCP’s control of distribution prices will only inhibit the renovation of old gas pipelines and worsen the gas safety problem.

China Gas Holdings, one of China’s gas giants, provides natural gas to 273 Chinese cities, and an urban population of 91 million.

China Gas Holdings is linked to some of the frequent gas explosions that occurred this year, including the largest gas explosion that occurred on June 13 at a market in the Yanghu residential district of Shiyan City, Hubei Province, killing 26 people, injuring 138, and destroying the entire market.

Four months later (Oct. 2), Hubei provincial authorities released an investigation report, saying the direct cause of the explosion was a severely corroded and ruptured gas pipeline, and Dongfeng Gas Company, a subordinate of China Gas Holdings, would be responsible for the accident. Eight employees, related to the accident, were detained.

Gui questions the veracity of the official death and injury figures, as the Chinese authorities are used to falsifying data on accidents and disasters to maintain their bids for local political stability. Considering the severity of the casualties, the penalty of only relieving some people of their jobs and detaining eight people is somehow reckless, Gui said.

The latest gas accident happened in a residential area in Shanghai on Nov. 9, the time of the CCP’s Sixth Plenary Session, but was not reported by the Chinese media.

Only the Yangpu District Fire Brigade in Shanghai, where the accident occurred, said on its official Weibo social media account that the explosion resulted in one death and three injuries.

“At the slanting opposite side of my house, [I saw] all the windows [of the building] were blown out,” posted one resident eyewitness.

On Oct.24, a flash gas explosion took place in a residential building in the Tiedong Wenshing community of the Wafangdian city, Liaoning Province, killing two people and injuring seven others, as confirmed by the municipal committee’s publicity department.

The northern province’s other gas accident occurred on Oct. 21 in a BBQ restaurant in Heping District, Shenyang City. The accident killed 5 people and injured 47 others, damaged over 3,000 homes, and affected nearly 100 stores.

On Sept. 10, an explosion occurred at a home in the Pulandian district of Dalian city, Liaoning Province, allegedly triggered by a leak from a liquefied gas tank, that killed eight people and injured five others. Sina, a Chinese media portal, quoted witnesses as saying that the explosion was about 800 meters away, felt “like an earthquake,” and shattered the windows of many nearby residential buildings.