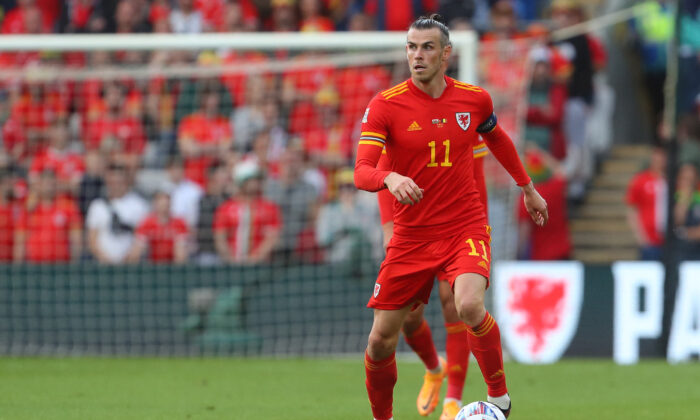 Wales' midfielder Gareth Bale runs with the ball during the UEFA Nations League - League A Group 4 football match between Wales and Belgium at the Cardiff City Stadium in Cardiff on June 11, 2022. (Geoff Caddick /Getty Images)
Soccer

Welsh soccer player Gareth Bale confirmed, at Monday’s Los Angeles Football Club (LAFC) press conference introducing him as the newest member of the club, that he intends to play beyond just one season with the goal of winning trophies with the MLS leading club.

“I’m up for everything here,” said Bale. “I still have many years to come. I haven’t come here to just be here for six months, 12 months. I’ve come here to try and be here for as long as possible. I want to do as well as I can. I want to try to make my mark on this league, on this team. I look forward to the future.”

The captain was pivotal in Wales qualifying for the 2022 FIFA World Cup, ending his home country’s 64-year appearance drought, as Wales was selected in the same group as the United States.

Bale scored two goals in the World Cup qualifying playoff semi-finals in a 2–1 victory over Austria, followed by scoring a free kick goal to win 1–0 in the finals over Ukraine on June 5 to obtain the final berth into this year’s World Cup in Qatar.

Following 19 trophies and the expiration of the world’s former largest transfer fee of €100.8 million ($101.2 million) in 2013, Bale spent the past nine seasons at Real Madrid. He then chose LAFC over his hometown Cardiff City before other potential offers could manifest.

The MLS Cup Final will take place on Nov. 5, 16 days prior to the World Cup kick-off, which would be an ideal schedule for training, as LAFC leads the MLS standings overall and hope to win their first tournament title.

Bale confirmed that he and his family feel very comfortable in Los Angeles having spent a few weeks every summer visiting before the 2019 pandemic.

“It’s not just a short-term thing … (LAFC) also gives me the best opportunity to go to the next Euros, maybe further. So my plan is to really work hard,” said Bale. “We’ve got a great plan going forward to get me up to speed, and hopefully it lasts as long as possible.”

Bale began his career in 2006 at the age of 16 years and 275 days, becoming the second youngest player ever to play for Southampton.

He would move to Tottenham for several seasons beginning in 2009 before winning the 19 trophies, including five European Champions League titles with Real Madrid.

Wales received confirmation that their record six-time Welsh Footballer of the Year intends to play in the 2024 European Championships.

“I haven’t come here for the short term,” confirmed Bale. “I want to make my mark on this league, and I think being here gives me the best possible chance to make it to the Euros, and you never know, maybe one more (World Cup). That’s my goal.”

In November 2014, Bale was involved with FIFA’s “11 against Ebola” campaign among top world players, including teammate Cristiano Ronaldo.

Bale’s LAFC move was announced on June 27, with a 12-month contract through Targeted Allocation Money (TAM) with options through 2024—similar to another recent signing of Italian captain Giorgio Chiellini.

General manager John Thorrington affirmed that LAFC has become “a destination of choice for star players,” to include their current international superstar Carlos Vela of Mexico.

“If he comes in a good shape, in a good way, he come with a good attitude, with good mentality, he will be so important for us,” said Vela prior to Bale’s arrival. “And I hope we can bring that level to the team to win a trophy.”

Bale was greeted with much excitement and fanfare when he arrived last Friday and witnessed his first El Trafico match-up, where LAFC won an exciting goal-filled battle, 3–2, versus cross-town rival L.A. Galaxy. Bale stated that he could not wait to play in front of this “great crowd.”

Bale seemingly hopes to follow the path of teammate Vela and other Galaxy internationals David Beckham and Robbie Keane who found great success in the MLS.

“The standard here is really increasing,” concluded Bale. “I think it’s a lot better than people in Europe really think.”