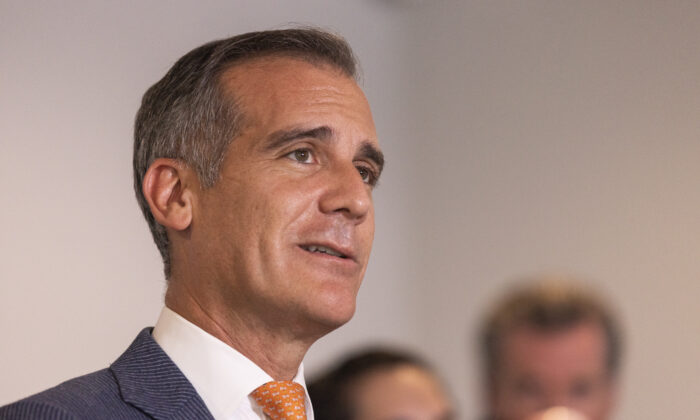 A former spokeswoman for Los Angeles Mayor Eric Garcetti is demanding the mayor be charged with perjury for denying that he knew of another former aide’s alleged sexual misconduct.

Last week, law firm Whistleblower Aide sent a 31-page letter (pdf) to the U.S. Department of Justice, the state attorney general, and the LA County district attorney on behalf of Naomi Seligman, who worked as Garcetti’s communications director from 2015 to 2017.

In the letter, Seligman accused Garcetti of committing perjury and conspiring with staff to cover up more than a dozen instances of sexual misconduct by his chief of staff and close advisor, Rick Jacobs.

In December 2021, Seligman published a letter in New York Magazine in which she also alleged Jacobs forcefully kissed her back in 2016, and that when she told Garcetti’s then-Chief of Staff Ana Guerrero, Guerrero brushed off her concerns, saying that there was nothing she could do about it as Jacobs was important to the mayor.

“Senators should be outraged that someone nominated to represent our country in a key diplomatic post would lie to their faces so brazenly,” Seligman said in a statement. “It’s time for them to take a serious look at the evidence that I and others have presented and live up to the commitment that many of them have made to protect victims of predatory behavior in the workplace.”

Garcetti declined to respond to reporters’ questions about Seligman’s complaint during a press conference on Feb. 7, but the mayor’s office released a statement denying the allegations.

“There is nothing new here—and these false claims about the mayor are just as ridiculous now as they were when they were first made,” the statement read. “The mayor stands by his testimony unequivocally, and more than a dozen witnesses have testified under oath that he was never made aware of any improper behavior.”

According to the letter, the mayor sent an email to staff in 2016 announcing that Jacobs would be placed on a leave of absence to work on political and civic matters, but that he would continue to “be a dear friend, and one of [his] most trusted advisers.”

During his deposition for the lawsuit in February 2021, Garcetti denied knowledge of the incident and of Garza’s accusation, claiming he was unaware of the allegations until the suit became public in July 2020.

President Joe Biden nominated Garcetti to be the U.S. ambassador to India last July and the Senate Foreign Relations Committee confirmed the nomination after a hearing in December; during the hearing, the mayor again denied his knowledge of Garza’s accusation.

“In regards to the specific [Garza] case, I want to say unequivocally, that I never witnessed nor was it brought to my attention the behavior that’s been alleged, and I want to assure you if it had been, I would have immediately taken action to stop that,” Garcetti said during the Senate hearing.

Seligman’s letter includes several other instances which claim the mayor was present for Jacobs’ misconduct.

The letter (pdf) includes a photo that shows Jacobs allegedly with his hand on another man’s genitals, while Garcetti allegedly smiles and gives two thumbs up in the photo.

“A picture is worth a thousand words,” the complaint said of the photo, though the letter notes that Garcetti denied having seen Jacobs’ pose while the photo was taken.

Mayor Garcetti’s office, as well as U.S. Department of Justice, California Attorney General, and LA County District Attorney, did not respond to requests for comment by press deadline.

A spokesperson for the city of Los Angeles was not immediately available for comment.