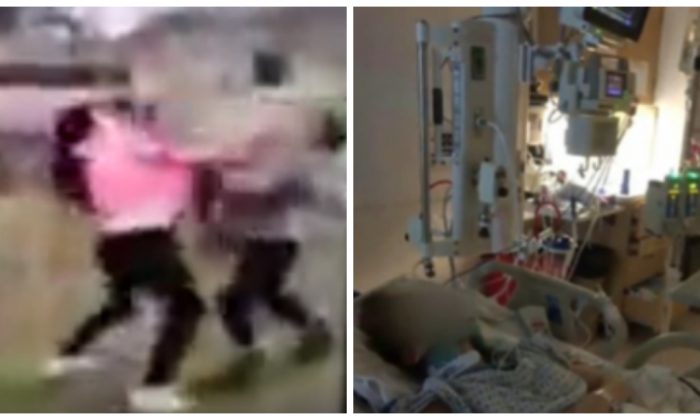 A screenshot of the fight video, left; and Maddie, the victim, in the hospital. (YouTube; Family Photo)
Crime and Incidents

Several people recorded a “fight club” brawl in Ohio in a video provided to police this week.

The fight left a 16-year-old girl in the hospital with multiple injuries, including a torn liver, a torn spleen, and cracked ribs.

Police officials told the Galion Inquirer on Wednesday that the three girls who beat the teen have been charged with felonious assault in the Crawford County Juvenile Court.

Janet Lugo, 15; Elise Grabenauer, 16; and Shantez Kemper, 16 were charged with what would be a second-degree felony if committed by an adult.

Bystanders seen in multiple videos from the scene apparently paid to witness the fight.

Crawford County Prosecutor Matthew Crall said the charges came after a lengthy investigation by the Galion Police Department. The investigation is still ongoing.

Bill Baker, a spokesman for the victim’s family, labeled the situation a “fight club” incident, and said the bystanders seen in multiple videos from the scene apparently paid to witness the fight.

Participants also reportedly paid, according to Baker. He told 10TV that it was the victim’s first fight.

Two people who witnessed the fight went to the police to report what happened. One of them, a woman, said she witnessed the brawl and was later sent video from another witness via Facebook Messenger. She said it “was very hard to watch” and she cried while watching.

The fight appeared to start when one of the three girls charged attacked the victim. The other two girls soon joined in the attack.

There were more than a dozen onlookers who neither tried to stop it nor called for any help.
— Brianna McCullough, victim's mother

“On Wednesday, March 2, my daughter was lured into a vicious attack by a group of girls who had conspired to get her into a position from which she could not get away. This gang of girls, all significantly bigger than my daughter, attacked and repeatedly kicked and punched my daughter while she lay on the ground,” the victim’s mother, Brianna McCullough, said in a statement obtained by the Newark Advocate.

“The most disturbing part is that there were more than a dozen onlookers who neither tried to stop it nor called for any help. As they stood there, cellphones in hand video recording the incident, my daughter suffered several life-threatening injuries. To my dismay, not one observer offered her any help as she got into her own car and drove herself home. No one called 911. No one even called to check on her.”

“At first I was so embarrassed to have lost the fight because I knew that was all that was going to be talked about, but I didn’t lose a fight, I got beat up from multiple people beating me. I see this as something that had to happen in order for other people to get help,” she said.

“There has been so many kids … that I’ve never even noticed before … that has come forward and said something about their problems. This experience has been a lot of things for sure, but to get support makes it seem like it is not such a long haul. It makes me stronger inside and out.”