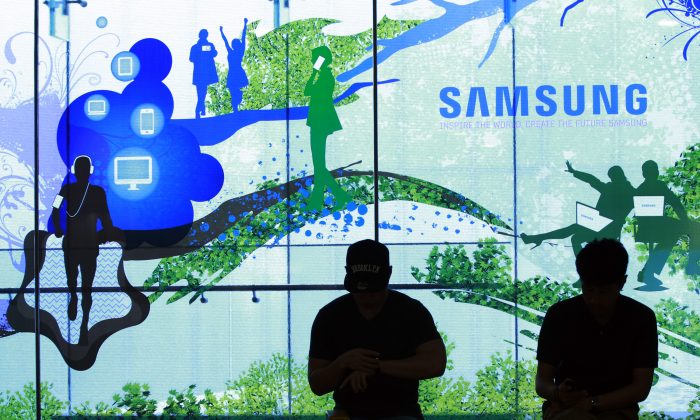 People stand in front of a Samsung Electronics Co's showroom in Seoul, South Korea, Thursday, July 31, 2014. Samsung Electronics Co. reported a bigger-than-expected fall in second quarter profit on Thursday and said it was uncertain if earnings from its handset business would improve in the current quarter.(AP Photo/Ahn Young-joon)
Tech

Samsung will be announcing the Galaxy Note 4 soon, and has identified some major U.S. wireless carriers that will carry the phablet.

According to The Korea Times, Samsung is rushing the Galaxy Note 4 “out the door” in an effort to “combat” Apple’s upcoming smartphone, most likely the iPhone 6, which is slated for release in September.

The Korea Times report also notes that Verizon, T-Mobile, AT&T, and Sprint will have “guaranteed shipments” of the Galaxy Note 4.

Samsung has yet to give a specific release date.

See the speculated specifications of the Galaxy Note 4, and an Associated Press article about Samsung’s second quarter profits below that.

SEOUL, South Korea (AP) — Samsung Electronics Co. reported a bigger-than-expected fall in second quarter profit on Thursday and said it was uncertain if earnings from its handset business would improve in the current quarter.

Samsung warned earlier this month that the second quarter would be its worst in two years as rapid growth in smartphone sales had faded. The company particularly struggled to compete in cheap smartphones, currently the fastest growing part of the global smartphone business. Samsung shares dived 4 percent in Seoul.

Its net income for the April-June quarter dropped 20 percent to 6.3 trillion won ($6.1 billion) from 7.8 trillion won a year earlier. That was the lowest since the second quarter of 2012. Analysts surveyed by FactSet forecast 6.5 trillion won income.

Robert Yi, head of investor relations, told a conference call that Samsung had higher marketing expenses as competition increased in mid- to low-end smartphones and because it tried to clear old inventory before the release of updated smartphone models in the fall. Tablet computer sales also fell, he said, citing weak overall demand.

Samsung sold 95 million mobile handsets in the quarter and smartphones were close to 80 percent of those sales, Yi said. It sold 8 million tablet PCs.

Research firm IDC estimated that Samsung shipped 74.3 million smartphones during the second quarter, down 4 percent from a year earlier, even as the overall smartphone market expanded 23 percent. Chinese vendors, Huawei and Lenovo, were the companies that drove growth in global smartphone sales.

Samsung was still the world’s largest supplier of smartphones but its global market share fell to 25 percent from 32 percent. The company’s smartphones use Google’s Android operating system.

Analysts said Samsung struggled in developing nations as consumers using handsets powered by the popular Android operating system were more willing to try devices from other brands. Switching between different Android devices has become easier and cheaper than before for consumers, reducing loyalty to one brand.

Smartphones have become ubiquitous in developed markets and are becoming so in emerging markets, making it harder to find people who are buying a smartphone for the first time, said Melissa Chau, senior research manager at IDC, a market research firm. “Just staying on Android is not going to keep you in one brand.”

That would make it more important for Samsung to develop unique services for its Galaxy phone users or to push use of its own software that does not rely on Google’s Android.

Samsung has stumbled in its efforts to make even a small move away from Android. Earlier this week, it delayed the release of the first smartphone powered by Tizen, its own mobile operating system, just two months after announcing a launch date. It did not give a future schedule.

For the third quarter, Samsung forecast it would sell more handsets as there is usually higher demand for consumer electronics during that period. But it would also face higher competition.

Apple Inc. is expected to release a new iPhone with a larger screen, the key feature in Galaxy phones that helped Samsung lure consumers from the iPhone.

“Looking ahead, the second half of 2014 will remain a challenge,” Samsung said in a statement.

In the previous years, Samsung released one high-end model during the third quarter. But this year, Samsung hinted that there will be one additional high-end model.

Kim Hyunjoon, senior vice president at Samsung’s mobile business, told the conference call that several new handset models are in the pipeline for launch in the next few months.

They include a new flagship model in the large-screen category and another premium phone with new design and materials. Kim did not elaborate what the new materials would be. In 2013, Samsung unveiled a smartphone with a curved display that was released in South Korea only.