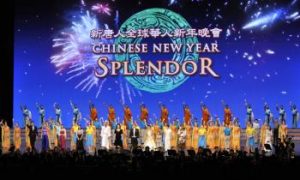 Mongolians Held for Going to Beijing to Appeal
0 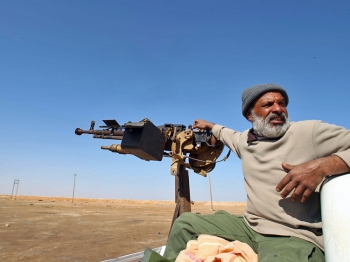 A Libyan rebel sits next to a heavy machine gun at the western gate of the eastern city of Ajdabiya, on April 12, 2011. (Marwan Naamani/AFP/Getty Images)
Africa

Gadhafi Forces Pushed Back by Rebels in Misrata

By Alex Johnston
Print
Rebel forces were able to push forces loyal to Libyan strongman Moammar Gadhafi out of the besieged town of Misrata on Tuesday night, according to media reports.

Pro-government forces attacked the city with renewed furor, using heavy artillery and tanks, but rebels say they were able to force them back.

“There was heavy fighting in Tripoli Street and the rebels held their positions,” a spokesperson named Abdulrahman told Al Jazeera. “Also, very intense fighting occurred on the eastern side of Misurata on the Nak el Theqeel road. The rebels repelled the attack.”

"It's been mostly random firing as the town is perched 750 meters above sea level and the pro-Gaddafi forces are in the foothills of the mountains," the spokesperson added.

Fighting between rebels and Gadhafi forces has been back and forth throughout much of the country for the past several weeks with neither side really gaining on one another. Pro-government forces have more superior weaponry and training, but rebel forces have been aided by NATO airstrikes on government military installations.

The U.K. as well as the French foreign ministry offices on Tuesday called on NATO to do more in its weeks-long campaign against Gadhafi, AFP reported.

Misrata should not “continue to come under fire from bombs,” French Foreign Minister Alain Juppe said, according to the news agency.

Juppe added that he hopes other countries come to aid in the coalition bombings. The United States initially led the strikes, but handed operations over to NATO.

Juppe’s comments come as rebels told European Union officials that forces loyal to Gadhafi killed at least 10,000 since the protests and ensuing conflict began on Feb. 17.