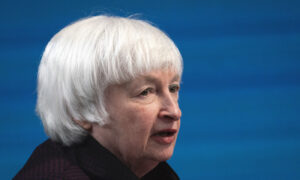 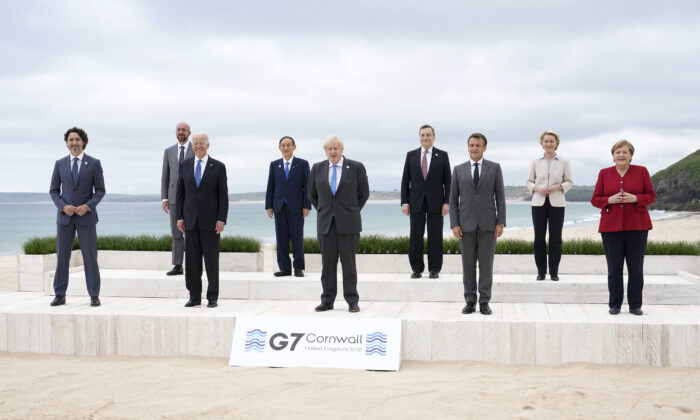 WASHINGTON—The Group of Seven (G-7) leaders rallied around a global tax deal last week in an effort to make big multinational companies pay their fair share of taxes. The agreement was met with swift opposition from Republicans, who called it a “tax surrender” for the United States.

Studies show that U.S. companies are likely to see the greatest impact on their taxes under the new proposal.

Leaders of the world’s seven richest nations on June 13 endorsed a plan that would allow governments to tax large companies more broadly and implement a global minimum tax of 15 percent.

The proposal, however, faces a roadblock in Congress. It may require changes to international tax treaties, which need bipartisan support. Several Republican lawmakers have already opposed the G-7 agreement.

“If the policy has to be adopted through a new tax treaty, which I think is likely, then you will need a two-thirds majority in the Senate to ratify it,” Daniel Bunn, vice president of global projects at the Tax Foundation, told The Epoch Times.

There are portions, however, that will require changes to laws other than tax treaties, he said.

Some actions, including changing the rules for the U.S. tax on global intangible low-taxed income (GILTI), could be done through a reconciliation process, which requires a simple majority vote.

The 2017 Tax Cuts and Jobs Act introduced a 10.5 percent minimum tax on GILTI to discourage corporations from shifting profits into tax havens by using intellectual property. In his American Jobs Plan, President Joe Biden has already proposed changing this rule and implementing a 21 percent tax on offshore profits of U.S. corporations.

Sen. Pat Toomey (R-Pa.) called the G-7 agreement “crazy,” according to a report by Financial Times.

“Certainly, the whole fact that they had to try to persuade all these other countries to make sure they raise their taxes is a confession of the damage we’re doing to our own country,” Toomey told reporters on Capitol Hill, adding that there would be insufficient votes to approve a new tax treaty.

Sen. Mike Lee (R-Utah) also reacted to the global tax deal, saying on Twitter, “This is what a cartel looks like,” after the announcement of the agreement by G-7 finance ministers.

The G-7 countries—Canada, France, Germany, Italy, Japan, the United Kingdom, and the United States—reached an agreement in principle, which is split into two pillars.

The first pillar focuses on allocation of taxing rights. Under the proposal, the world’s largest and most profitable multinational companies would pay more taxes in countries where they generate sales. This new tax could potentially replace digital services taxes on big technology companies, mainly U.S. firms such as Facebook, Apple, and Google.

The second pillar imposes a global minimum tax on potentially any company that has a low effective tax rate on foreign earnings. It proposes a global minimum tax of at least 15 percent to operate on a country-by-country basis, in order to remove the benefits of shifting profits. Under the proposal, if companies pay lower rates in a particular country, their home countries could “top-up” their taxes on foreign earnings to the minimum rate.

“With this, we have taken a significant step towards creating a fairer tax system fit for the 21st century, and reversing a 40-year race to the bottom,” the G-7 summit communiqué reads.

The leaders agreed to continue the discussion to reach an agreement at the Group of 20 meetings in July. This may finally lead to a global agreement among 140 countries led by the Organization for Economic Cooperation and Development (OECD), which has been working on cross-border tax reform for years.

The proposed changes could increase global corporate income tax revenues by $50 billion–80 billion per year, according to the OECD. Countries such as Ireland and Hungary that have a corporate tax rate below 15 percent are expected to lose tax revenues to other countries.

Under the first pillar, technology, health care, and pharmaceutical companies are likely to see the greatest impact on their tax rates, according to a research report by Morgan Stanley.

“From a corporate tax revenue perspective, the U.S. is likely to have the greatest impact,” the report stated, which could result in reduced tax revenue for the United States. This is because out of the 100 multinationals that could come under its scope, the majority of them are based in the United States (roughly 48 percent), followed by France (8 percent), Germany (7 percent), and Japan (7 percent),” according to the report.

Under the second pillar, Morgan Stanley estimated that 400 companies across 23 developed markets could be exposed to a 15 percent minimum tax rate, and these companies currently pay a median cash tax rate of nearly 8 percent.

“Thus, in theory, a 15 percent minimum would nearly double the aggregate tax burden of this group,” the report said.

Among the U.S. tech giants, Amazon and Facebook pay two of the lowest tax rates. Amazon’s effective tax rate was 11.8 percent and Facebook’s was 12.2 percent in 2020, according to S&P Global.

There are also other tech companies that pay even lower tax rates, such as chipmaker NVIDIA Corp., which had an effective tax rate of 1.7 percent in 2020 due to income earned in low-tax jurisdictions, as well as research and development credits and various tax benefits.

“We look forward to reviewing the details of today’s deal and applaud the Biden Administration’s leadership in working to level the international playing field and support American workers,” the Democratic lawmakers wrote.

GOP members, however, pledged to fight “tooth and nail” against the global minimum tax, top Republican on the House Ways and Means Committee Kevin Brady (R-Texas) told The Associated Press.

They view the minimum tax as “a surrender” for American companies and “a windfall for foreign competitors.”

“Despite the fanfare surrounding the Administration’s foreign tax deal, creation of this global tax cabal is no cause for celebration,” a statement by Ways and Means Republicans said. “It confirms President Biden’s willingness to surrender American jobs and provide protection to foreign competition—not to American companies and workers.”