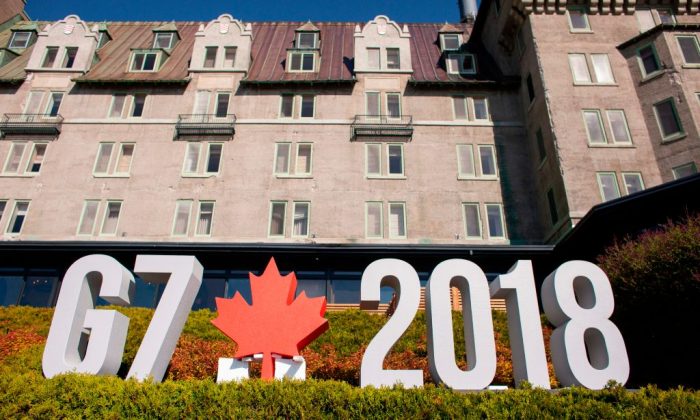 A sign sits in front of the Manoir Richelieu, the site of the G7 leaders summit in La Malbaie, Quebec, June 8. (GEOFF ROBINS/AFP/Getty Images)
Politics

QUEBEC CITY—Group of Seven (G7) leaders are expected to make decisions on how to defend democratic nations from foreign interference in their elections.

A senior diplomatic source said the G7 leaders would announce measures to combat election interference similar to Russia’s meddling in the 2016 U.S. election, according to The Globe and Mail.

The official said the talks would focus on cybersecurity and disinformation efforts by foreign countries. The leaders would also seek better ways to combat incidents such as the nerve-agent attack on a former Russian double agent Sergei Skripal and his daughter in the English city of Salisbury in March.

President Donald Trump expelled 60 Russian spies following the attack, in response to the nerve-agent attack and their aggressive intelligence gathering on American soil.

“I have been Russia’s worst nightmare,” said Trump on Friday before departing to the G-7 summit in Canada.

Britain’s defense secretary Gavin Williamson also announced on Friday that British troops would be deployed to protect Bosnia elections from Russian interference. Nearly 40 military personnel will be sent to Bosnia and Herzegovina ahead of parliamentary and presidential elections in October, according to a report by The Times.