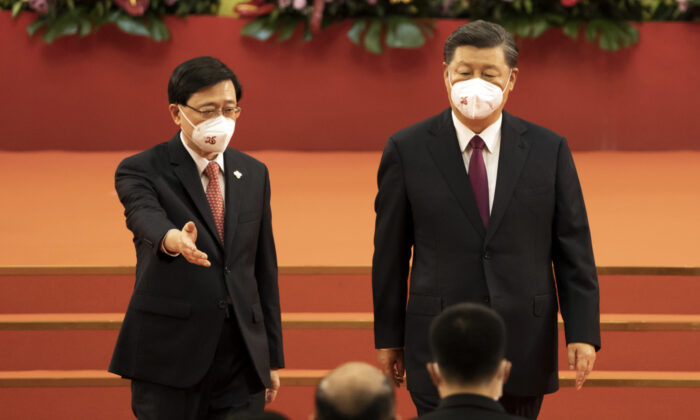 Nie Law
Nie Law is a contributor to The Epoch Times with a focus on Hong Kong-related topics.
View profile
and Leo Cheung

Chinese Leader Xi Jinping, traveled to Hong Kong on July 1, 2022, to celebrate the 25th anniversary of China’s takeover of Hong Kong in 1997. In his speech at the inauguration ceremony of the sixth chief executive of Hong Kong,  Xi repeatedly mentioned “one country, two systems,” praising how “great” it is, but this received criticism from Hong Kong scholars.

Foreign ministers of the G7, and the High Representative of the European Union, issued a joint statement, describing that instead of electing a candidate, it has become the handpicking of the city leader. Its process is a continuation of attacking the dynamic system and fundamental freedoms of Hongkongers. The groups showed serious unified concerns about the erosion of civil rights and autonomy in Hong Kong.

Some scholars said the entire speech was about making “one country, two systems” a meaningless slogan. They commented that according to the Chinese Communist Party’s (CCP) playbook, the “two systems” will eventually become “one country.”

‘Eliminate Anything That Stands in Their Way’

In Xi’s 32-minute speech, he mentioned “one country, two systems” 21 times, versus the times he mentioned Hongkongers, or self-governance, which was only once. Interestingly, Xi mentioned “patriots” five times. Meanwhile, Xi talked about the Basic Law of Hong Kong but followed it with “total governing power,” four times.

Current Affairs Commentator, Stephen Siu Yeuk-yuen countered Xi’s comment during his online show, “If CCP becomes the owner of the total governing power, then no Hong Kong “compatriots” will become their own masters. Not a single Hongkonger.”

Professor Chung Kim-wah, former assistant professor in the Department of Applied Social Science at the Polytechnic University of Hong Kong, criticized the entire speech of Xi, “What Xi said is just an empty shell and there is no substance to ‘one country, two systems.’ CCP is switching around its words to suit whatever it needs. It still hopes it can fool some people by throwing out the these words.”

Chung said CCP is still fantasizing about Hong Kong being an international city and a global finance hub, with no democracy, no freedom, and no rule of law.  They are only thinking about how they can maximize their gains, while crushing Hong Kong’s economic values.

Commentator Stephen Siu Yeuk-yuen said, “CCP will do whatever they want, keep whatever benefits them, and eliminate anything that stands in their way.”

‘CCP Has Damaged the ‘One Country, Two Systems”

Ironically, western countries shared their opinions as soon as John Lee Ka-chiu, a former policeman was appointed as the new Chief Executive of Hong Kong in May 2022. The opinions were unanimous. “CCP has damaged the ‘one country, two systems’ principle. The Council of the European Union had expressed regretfully, that the electoral system in Hong Kong has been diminished by the so-called new ‘perfected’ election system, which is a step to further disintegrating the policy: It shreds the already limited democratic elements in the city, which is the opposite of the promise the Basic Law represents.”

Edwin J. Feulner, founder and former president of the Heritage Foundation, said “Hong Kong politics is being manipulated by Beijing, and that Hong Kong has lost more political freedom and autonomy over the past two years, making the city almost identical to other major Chinese cities.”

In the surveys conducted by the Heritage Foundation, Hong Kong used to be top ranked for having a high degrees of economic freedom for 25 years in a row. The city was surpassed by Singapore in 2020 and was kicked out of the list by 2021, as its ranking became inclusive of China’s. Mainland China is ranked at the bottom of the index at 107, which is considered an “economic system that is mostly unfree.”