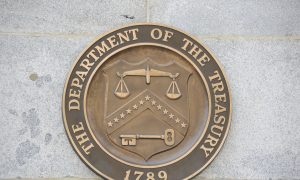 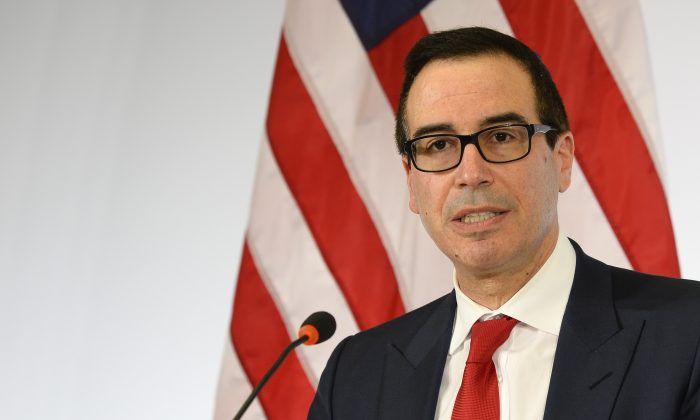 US Secretary of the Treasury Steven Mnuchin speaks during a press conference at the G20 Finance Ministers and Central Bank Governors Meeting in Baden-Baden, southern Germany, on March 18, 2017. (THOMAS KIENZLE/AFP/Getty Images)
International

But they yielded ground to the newcomer’s push for the Group of 20 major economies to abandon a decade-old pledge to resist protectionism and to delete communique language on financing the fight against climate change.

According to G20 officials who interacted with Mnuchin at the meeting in the spa and casino town of Baden-Baden, Germany, many opted not to challenge Mnuchin on protectionism language.

Instead they chose to give some space to him and Trump’s new administration to refine their trade views in the hopes for moderation by the time Germany hosts a G20 leader’s summit in July.

Five weeks into his new job, the former Goldman Sachs and commercial banker is currently the only Senate-confirmed Trump appointee working at Treasury. And the Trump administration has not yet decided on the specific policies it will use to make good on campaign pledges to shrink U.S. trade deficits and grow American manufacturing jobs.

Options under consideration range from more aggressive anti-dumping enforcement efforts to renegotiating trade deals and enacting a proposed border tax levied on imports. During his campaign, Trump threatened unilateral tariffs on Mexican and Chinese goods and said he would quit the North American Free Trade agreement unless it is renegotiated to his liking.

“We have a new administration in Washington which still has to define precisely its narrative, especially in the context of what was said in the campaign,” said Pierre Moscovici, European Commission Economic Affairs Minister.

“I think Mnuchin is an articulate, constructive and pragmatic man,” Moscovici said. “More work needs to be done to find common ground. It was not ready here. It is not a total surprise.”

“That’s why I think we can do good business together,” Aso told reporters.

In the G20 plenary sessions, Mnuchin took to the floor only once, reading from a prepared statement, according to a G20 official, while counterparts from China and France argued forcefully in favor of keeping the anti-protectionism pledge.

While Mnuchin concentrated on making good first impressions with his G20 counterparts, U.S. negotiators behind the scenes insisted that they could no longer accept previous language vowing “to resist all forms of protectionism.”

This was replaced with a watered-down pledge to “strengthen the contribution of trade to our economies”—language viewed by some participants as preserving U.S. flexibility on trade policy.

German Finance Minster Wolfgang Schaeuble, who met with Mnuchin in Berlin before the Baden Baden meeting, said consensus could not be reached on the meaning of protectionism.

He suggested at a news conference that Mnuchin may not have had a clear mandate to negotiate on trade issues.

Asked about this, Mnuchin said he knows Trump’s desires on trade and negotiated them from Baden Baden, adding: “the new language makes sense.”

The deletion of a “ritualistic phrase” in the G20’s core language could over time diminish U.S. influence, said Eswar Prasad, a former International Monetary Fund official and trade policy professor at Cornell University.

“The U.S. may have won this battle by forcefully imposing its will on the rest of the G20, but the outcome represents a step backward in U.S. global leadership on issues such as the promotion of free trade and tackling climate change,” said Prasad.

But the Baden Baden meeting established Mnuchin as a pragmatic operator in the Trump administration’s drive for a more level playing field on trade, said Domenico Lombardi, another former IMF official now with the Centre for International Governance Innovation, a Canadian think-tank.

“It’d be in the interest of Germany and Europe to establish a strong, bilateral relationship with the new Treasury secretary rather than questioning his authority,” Lombardi said. “The alternative for them would be to negotiate directly with Trump and that would be worse.”