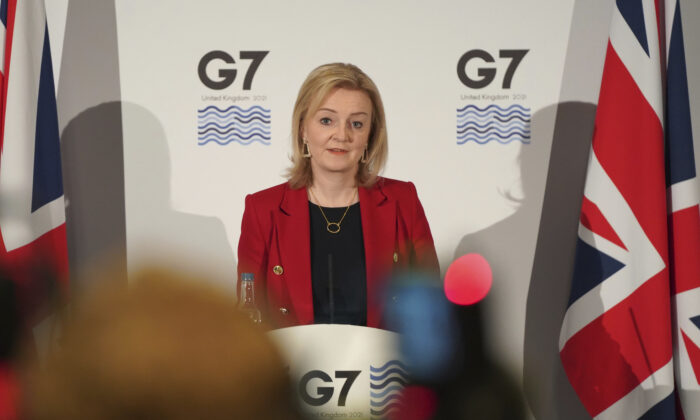 The Group of Seven (G-7) foreign ministers on Dec. 12 expressed concern over China’s “coercive economic policies” and the challenges posed by the Chinese regime in the East and South China Seas, as well as the human rights violations linked to Beijing, during their first meeting with ASEAN nations.

British Foreign Secretary Liz Truss, who chaired the meetings, said discussions on China covered “a range of issues and challenges,” including human rights issues in Hong Kong, where China is accused of oppressing democratic freedom, and Xinjiang, where it’s accused of targeting the Uyghur ethnic minority.

In a statement, Truss said the ministers also spoke of “the importance of peace and stability across the Taiwan Strait” and the issues in the South China Sea, such as those related to “the land reclamations, activities, serious incidents in the area,” which may undermine peace and stability in the region.

The G-7, which comprises the United States, the UK, Canada, France, Italy, Germany, and Japan, and their ASEAN counterparts, reaffirmed its “shared interest in maintaining a free and open Indo–Pacific region” and encouraged “intensified cooperation in promoting maritime security,” Truss said.

The ministers also called for North Korea to refrain from “provocative actions” and engage in a diplomatic process to have “complete, verifiable, and irreversible abandonment” of all its unlawful weapons of mass destruction and ballistic missiles.

“We urge the DPRK [Democratic People’s Republic of Korea] to respect human rights for all and to resolve the abductions issue immediately,” Truss said.

Though the G-7 ministers welcomed the resumption of negotiations in Vienna on restoring the Joint Comprehensive Plan of Action, which aimed at reviving the Iran nuclear deal, they urged Iran to halt its nuclear escalation and seize the opportunity now to conclude a deal.

Meanwhile, Japan’s Foreign Minister Yoshimasa Hayashi and his Australian counterpart, Marise Payne, have agreed to boost the countries’ “special strategic partnership” to “a higher level” to achieve the “Free and Open Indo–Pacific” goal, according to the Japanese foreign affairs ministry.

The two ministers, who met at the sidelines of a G-7 Foreign and Development Ministers’ Meeting, emphasized that Japan and Australia would continue to assist in building quality infrastructure in the Indo–Pacific region, including by utilizing the framework of Japan, Australia, and the United States.

Australia and the United States have also reaffirmed their efforts to promote peace and prosperity in the Indo–Pacific and aim to deepen their alliance amid concerns over China’s military and economic ambitions in the region.

Separately on Dec. 11, Australia, Japan, and the United States signaled that they will jointly fund an undersea cable to improve internet connectivity to three Pacific nations—the Federated States of Micronesia, Kiribati, and Nauru.

“The proposed undersea cable will provide faster, higher quality, and more reliable and secure communications to approximately 100,000 people across three countries,” a joint media statement between the six countries reads.