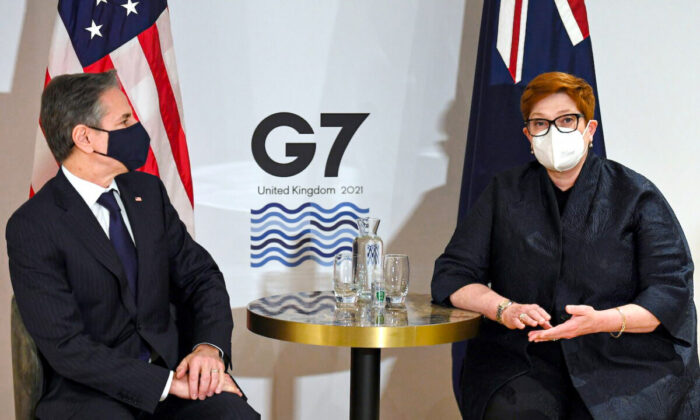 Australian Minister for Foreign Affairs Marise Payne and U.S. Secretary of State Antony Blinken met on Dec. 11 and reaffirmed their respective nations’ combined efforts to promote peace and prosperity in the Indo-Pacific, amid concerns over China’s military and economic ambitions in the region.

The two diplomats also discussed “deepening the U.S.–Australia alliance,” “the importance of committing to ambitious climate action in the next decade,” and their mutual concern over “Russia’s ongoing aggression against Ukraine and reiterated support for a peaceful resolution of cross-strait issues without resorting to threats or coercion,” State Department spokesperson Ned Price said in a statement.

They also “emphasized Taiwan’s important contributions to global health development,” according to Price.

Blinken and Payne “agreed on the importance of having a Senate-confirmed Ambassador in place” in Canberra—Australia’s capital city—”as soon as possible in light of the scope and scale of shared challenges we face,” Price said.

The meeting came on the sidelines of a Group of Seven (G-7) Foreign and Development Ministers’ Meeting in Liverpool, England, marking the second time the ministers have met in 2021. The G-7 forum includes Blinken’s counterparts from Canada, France, Germany, Italy, Japan, and the UK.

Payne joined the meeting as a guest. Ministers from the EU, South Korea, and India will also take part in some sessions as guests of the G-7, along with representatives from the Association of Southeast Asian Nations (ASEAN).

“For the first time, a number of countries from ASEAN will attend, reflecting the world’s increasing focus on the Indo-Pacific and the importance of ASEAN centrality,” Payne announced prior to the meeting.

Both Payne and Blinken noted that the United States and Australia have made progress in their alliance in 2021, citing their Quad Leaders’ Summit, as well as the AUKUS security pact, a new tri-lateral alliance between Australia, the United States, and the UK. Experts have told The Epoch Times that AUKUS can play a key role in countering aggression from the Chinese Communist Party (CCP) and promoting a “free and open Indo-Pacific.”

Blinken and Payne’s latest meeting follows a September meeting in Washington at the annual Australia–U.S. Ministerial (AUSMIN) talks. A joint statement released by the two countries at the time indicated the nations’ commitment to cooperate on technological innovation, the development of secure supply chains, and support for human rights and multilateralism—including Australia’s decision to adopt Magnitsky-style human rights sanctions.

“The proposed undersea cable will provide faster, higher quality, and more reliable and secure communications to approximately 100,000 people across three countries,” a joint media statement between the six countries reads. “This will support increased economic growth, drive development opportunities, and help to improve living standards as the region recovers from the severe impacts of COVID-19.”

Daniel Teng and Reuters contributed to this report.