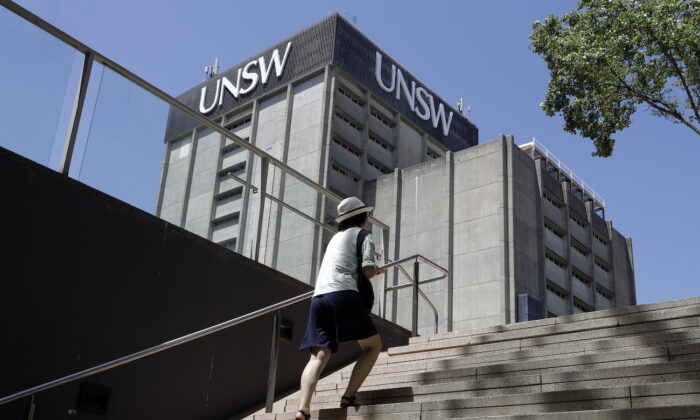 A student walks around the University of New South Wales campus in Sydney, Australia, on Dec. 1, 2020. (AP Photo/Mark Baker)
Australia

A new comprehensive analysis on Australian graduate income sourced from tax data reveal that the chosen course of study plays a more important role than the institution a student studies at in determining future salary.

Education Minister Alan Tudge said the data would give future students additional information to choose their course of study.

“The new report helps students make informed decisions into income outcomes one, five, and nine years after students graduate, as well as breakdowns across 73 fields of study and by institution,” Tudge said. “This is a very helpful report for students to plan their futures.”

Using the modified figures, graduates that studied medicine earned a median annual income of $191,800, widening the income gap from the next highest earning area of study, dentistry, at $119,800. Other high earning courses include engineering, law, and pharmacy.

The study area that earned the lowest median income after a decade was creative arts, at $60,200. Other courses that led to low earnings include social work, tourism, veterinary science, and social sciences.

“Study area has the largest influence on graduate incomes ten years after graduation,” the report authors wrote. “Study areas with high initial incomes also tend to have higher incomes over the longer term.”

One decade after graduation, the chosen study area accounted for 9.2 percent of the variations in income, while the institution of study accounted for 2 percent. Alumni from the University of New South Wales were found to have the highest income after 10 years.

The study also found that there is little difference between the earnings of men and women after graduation.

However, after 10 years, female graduates earn around $26,700 less than male graduates, making gender the next most prominent influence in earning outcomes.

It also found that the choice to do further full-time study had very little influence on incomes after 10 years, explaining 0.2 percent of the income variation.

Factors that explained 0 per cent of income variation after 10 years include the choice of full-time or part-time study, whether students were admitted to the university through ATAR or other pathways, and Indigenous status.

By following the Global Financial Crisis (GFC) graduate cohort, the study found that graduates have since taken longer to settle into the labour market immediately after graduation.

“The experience of graduate cohorts following the GFC demonstrates demand-side factors play an influential role in shaping graduate incomes,” the authors concluded. “That said, the different choices made by male and female graduates as they move between various labour market states highlights the role supply-side factors play in influencing graduate incomes over the longer term.”