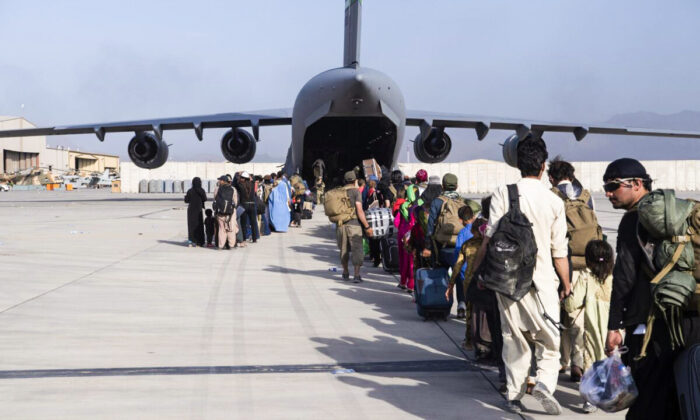 About a year ago, the United States pulled out of Afghanistan, bringing America’s longest war to a chaotic end. The deaths of nearly 2,500 Americans, including the loss of 13 service members to a suicide bombing attack at Hamid Karzai International Airport in Kabul on Aug. 31, 2021, still rings fresh in the ears of many.

With another almost 3,000 deaths attributed to the 9/11 attacks almost 21 years ago, the events surrounding Afghanistan may be seared into the memories of Americans forever.

“The day that U.S. troops left, all democratic Afghans lost their hope and desire,” said Ahmad Ehsan (a pseudonym), who was an interpreter and culture adviser for the U.S. military in Kabul between 2018 and 2021. “Many Afghan people lost their trust in the U.S. government, especially since the Biden administration.”

People are now hiding from the Taliban, said Ehsan, who asked to use a pseudonym for fear of deadly reprisal. While safe houses have been established for those who worked for the U.S. government, he said many who tried to take refuge in them have been arrested.

“Their fate is unknown,” Ehsan said. “Nobody knows where they are—whether they are alive or killed by Taliban.” A brutal death, including torture, is not out of the question, he said, adding that those seeking protection in safe houses are “hunted by Taliban.”

Ehsan said he recognizes that the Afghan people and U.S. service members both “feel betrayed by the U.S. government.”

He says U.S. President Joe Biden “needs to answer for victims’ families, for those that not only lost their sons and daughters in Afghanistan, but those who will lose their lives in the years ahead.”

“Biden delivered Afghan people and Afghanistan to terrorists,” Ehsan said. “It was Biden’s wrong decision that put many people in trouble and at risk for years to come.”

With the Taliban in control of the government in Afghanistan, “we lost a lot of things that we gained in the past 20 years with many sacrifices,” he said.

He said Afghanistan has “a dark future” under the Taliban’s ideology.

Since the U.S withdrawal, girls aren’t able to attend school and women are no longer able to work. Many men have lost jobs they held under the previous government, and the Afghan army was dismantled. The Taliban also are censoring the media, he noted.

“We [not only] lost freedom of speech, but more than that, we lost our democracy,” he said. “Afghanistan is changing again to [a] terrorist state.”

The presence of Al-Qaeda and other terrorist groups is on the rise, he said, predicting “the next 9/11 will once again happen in the USA from Afghanistan.”

Feelings of Fury and Shame

“We pulled out, 100 percent abandoning the Afghan people,” said Air Force Capt. Mike Brogan (a pseudonym), who was “flying overhead that summer” as the withdrawal unfolded. “I was furious, ashamed, saddened to tears.

“We went to war to protect the innocent, whether that was the American people or the people of Afghanistan.”

Brogan, an active-duty pilot, asked to use a pseudonym, fearing reprisals and emphasizing that his views don’t reflect those of the Pentagon or the Air Force.

Speaking on behalf of those who served in Afghanistan, he said, “We as Americans try to see ourselves as the good guys, but that’s not how leaving an entire country to its upheaval makes you feel.”

Brogan expressed mixed feelings about the ongoing threat of terrorism around the world.

“It’s becoming increasingly clear that people are worrying less about another Twin Towers attack, and looking more toward China and Russia and who’s coming through the southern border,” he said.

Mistake of a Hasty Withdrawal

Despite the growing number of threats around the world, “it’s very clear that people will always remember 9/11 and the attacks all the way up to the U.S. withdrawal,” retired Maj. Gen. Jeffrey Schloesser (ret.), former commanding general of the U.S. Army’s 101st Airborne Division and NATO’s Regional Command-East in Afghanistan.

“We went to Afghanistan to, essentially, bring justice to al-Qaeda,” he said.

Under the leadership of Osama bin Laden, al-Qaeda was responsible for several mass-casualty attacks around the world, as well as the series of attacks in the United States in 2001.

Bin Laden was killed by U.S. special operations forces in 2011, and the extremist ideology and terrorist acts of al-Qaeda and the Taliban were largely quelled in Afghanistan as a result. Subsequently, Schloesser said the United States had already begun to “broaden its mission from just bringing justice to al-Qaeda to actually trying to ensure that Afghanistan wasn’t going to be a failed state where another terrorist group would emerge.”

In that process, Schloesser said, “the United States gave hope to an entire generation.”

“You still have 20-year-old girls who were born after 9/11, born after what you would call the liberation from the Taliban, who thought that they could be doctors, journalists, writers, businesswomen, and more,” he said.

Echoing Ehsan’s comments, Schloessler said, “all that’s been taken away by our too hasty withdrawal.”

Schloesser also shares a similar feeling to Brogan, saying: “I feel liked we have abandoned the Afghan people.

“If anyone believes it was a noble cause to bring justice and help the Afghan people in the process so they did not revert back to a failed state, that person was left feeling a sense of loss as they watched the sheer chaos and horror of the withdrawal.

“It’s seared in my memory, and I’ll die thinking of not only that day, but also my 15 months there.”

“I’m extremely let down by the way our government left Afghanistan, considering so many people in the military have literally fought, bled, and died in that country. To see our efforts go away as quickly as they did, with no one really caring, makes it very hard to comprehend as a veteran who served there.

“There was once a level of patriotism there, a good feeling about what our armed forces represented being there with boots on the ground, trying to help the Afghan people. While some say we shouldn’t have been there, others like me choose to see a level of humanity.”

For nearly 20 years, Blakeley said many had hope. But as the final flights began departing Afghanistan, “hope was taken away.” He recalls “people literally begging and pleading to get out of Afghanistan alive.”

Today, he said, “you can still see a desperation for freedom in the eyes of Afghans, whether they continue to want in their own country or find it in another.”

For service members like himself and countless others, Schloesser said, “it is important to remember what we did to keep our country from being attacked on our own soil for over two decades.”

That, he said, is “incredibly noble and no one can take that away.”

He’s now “concerned about what Afghanistan has already become and what it will become.”

“[The U.S. military] didn’t have a choice in this one; it had the responsibility to protect our nation and pursued a noble cause, bringing hope to so many folks in Afghanistan,” he said.

Yet, he added, “the entirety of the event as it happened, all the way to the withdrawal, won’t leave me.”

“We left the country, leaving behind many who may or may not be able to get out,” he said.

While Ehsan remains hopeful that he may experience freedom one day, he’s pleading for the U.S. government and the American people to “save Afghan allies and evacuate them as soon as possible before they are hunted by Taliban.”

“U.S. Afghan allies will be arrested, tortured, and killed by Taliban, whether you worked for one day, or many years, for the USA,” he said.

America’s best allies are now called “American spies, American dogs, and even infidels,” according to Ehsan. He showed The Epoch Times multiple letters of support for his application for a Special Immigrant Visa for Afghan interpreters.

One letter from a commanding officer commended his “strong character, high morals, and positive attitude.” The letter stated that because of his previous education and employment experience, “he would easily find employment” in the United States.

In other letters, he was described as “a strong advocate for the United States and Coalition security mission in Afghanistan,” and one who “put himself in danger” to support the mission and is “absolutely deserving” of a special immigrant visa.

Yet Ehsan has been denied a visa on more than one occasion. In another letter of support, an Army officer questioned the denial to no avail.

“This is not only about me,” Ehsan said, explaining that there are 1,000 other Afghan combat interpreters in the same predicament.

While Ehsan remains hopeful, he said he’s “still working to keep families safe from these devils.”

Officials at the White House and Pentagon didn’t respond by press time to a request by The Epoch Times for comment.