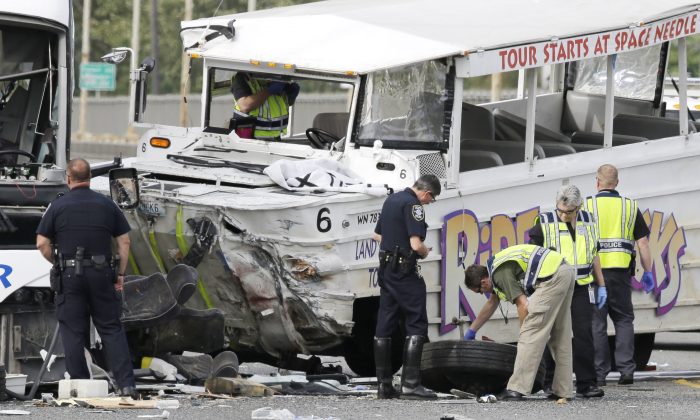 Seattle Police investigators examine the front tire from a Ride the Ducks tour bus as it lies on the ground following a crash involving the tour bus and several other vehicles, Thursday, Sept. 24, 2015 in Seattle. (AP Photo/Ted S. Warren)
US

‘Fun’ Tour of Seattle Turns Into Nightmare for Students

Rujia Xie and other North Seattle College students were on their way to the city’s iconic Pike Place Market and Safeco Field for new student orientation events Thursday when she heard the crash from the back of the bus.

She smelled gas and felt glass falling on her face. She and others jumped from the bus.

Traveling in the opposite direction, two Philadelphia friends on a road trip across the country, Brad Volm and Bradley Sawhill, were cruising over picturesque Lake Union when they said they saw the duck boat’s left tire “lock up” as it swerved into the charter bus, t-boning it. Their SUV hit another truck head-on, but they escaped injuries.

“It all happened so fast. I got out of my car, and there were just bodies, just everywhere. People lying in the street,” Volm said.

The amphibious vehicle is operated by a tour company called Ride the Ducks, which offers tours known for exuberant drivers and guides who play loud music and quack through speakers as they lead tourists around the city.

The collision on the Aurora Bridge, which carries one of the city’s main north-south highways over the lake, left a tangled mess of twisted metal, shattered glass and blood, witnesses said.

Authorities say 51 people were taken to area hospitals. Susan Gregg, a spokeswoman for Harborview and the University of Washington medical centers, released a statement Thursday night that gave the conditions of some of them. At Harborview Medical Center, two people are in critical condition and 10 are in serious condition in intensive care, Gregg said. Three other people are in satisfactory condition, she said.

The stretch of highway where the accident took place reopened for traffic about 11 p.m. Thursday, the state Transportation Department said. The National Transportation Safety Board sent a team of 17 people to Seattle, and Mayor Ed Murray said they were taking over the investigation.

There was no immediate word about the cause of the crash, which involved a military-style tour bus that can also be operated on water. Initial reports described the accident as a head-on collision.

Three dozen people were on board the duck boat, as well as the driver, who is certified by the Coast Guard and a licensed commercial driver, company President Brian Tracey said. He said he did not know what happened or caused the crash.

“We will get to the bottom of it,” he told The Associated Press. “Our main concern right now is with the families of those hurt and killed.”

Murray said the company had voluntarily taken the duck boats off city streets for the time being.

Tourists on board the duck boat told reporters they were snapping pictures when they say they were thrown from the vehicle.

Lying in his hospital bed, Tim Gesner, 61, of Orlando, Florida, told The Seattle Times he was standing in the back of the duck boat and trying to take a picture with his cellphone after their tour guide pointed out the view. He felt the vehicle start to fish-tail, and the driver said, “Oh, no.” Gesner looked forward and had a clear view of the duck boat veering left, directly into the bus.

“Then next thing was it’s like you see in the movies,” he told The Times. “I was floating in this surreal world, like I was in slow motion bouncing off of things and just feeling the pain shooting everywhere and then my face slamming against the seat in front of me and then it was quiet. I just turned and looked, and that’s when I saw the carnage.”

Murray said efforts were being made to contact consulates because foreign students were on the charter bus. He said they were from different countries.

Witnesses described hearing a loud screech and then seeing injured people lying on the pavement or wandering around in a daze.

Nurse Jahna Dyer was walking across the bridge when she came upon the scene. Some victims were lying on the road. Others milled about, seemingly in shock and falling down.

Dyer jumped a railing separating the sidewalk from the roadway and helped stabilize an injured man’s neck. She said she also helped a woman who had a cut lip and glass in her eye. “She was holding my hand and saying thank you,” she said.

John Mundell said he was at the south end of the bridge when the crash occurred. “We could hear the screech and twisted metal. It was surreal,” he said. “I felt helpless.”

North Seattle College spokeswoman Melissa Mixon said 45 students and staff with the school’s international programs were on one of two charter buses on their way to downtown Seattle. “It was to be a fun introduction to Seattle,” she said.

Kuen Shouh Wu says his 18-year-old daughter was on the charter bus, but she was not hurt. He and his daughter, Ming Chao Wu, are from Taiwan, and he is a visiting scholar at the University of Washington. Wu said when he learned of the accident, he came to the school.