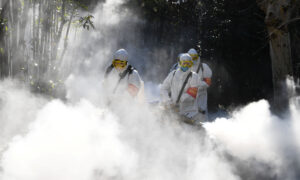 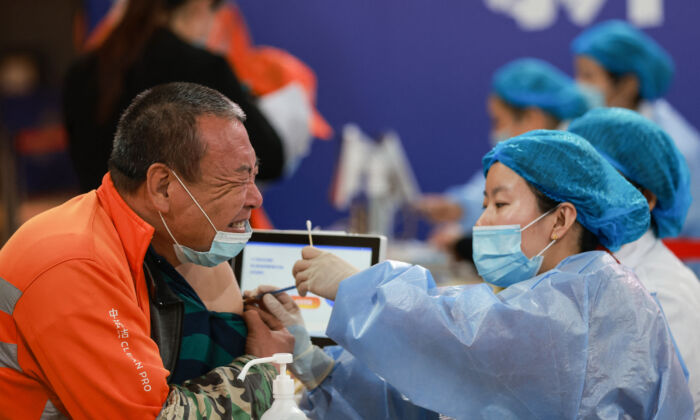 Chinese workers at a shipping company in the Yantian District of Shenzhen city recently tested positive for the CCP virus despite being vaccinated earlier this year. The reinfections have caused concern, and local authorities have begun COVID-19 testing for over 7,000 residents each day, starting last week.

One of the infected people is the wife of a port worker. All seven are currently receiving treatment at a local hospital, authorities said.

Since December 2020, local authorities have administered vaccines for “high-risk” groups or individuals who are at higher risk of contracting the virus, including port workers and those who handle imported cold-chain products, according to an official statement. Port workers of the Shenzhen shipping company are among those “high-risk” groups.

Shenzhen health authorities reported that all “high-risk” groups have been fully vaccinated in the city as of May 20.

A worker from Shenzhen Ocean Shipping Tally told The Epoch Times on May 25 that the staff was required to be fully vaccinated. Huang Zong (a pseudonym) said that he was vaccinated twice in early January. Huang said that he has been quarantined since May 20, when one of the employees, surnamed Mu, received a positive COVID-19 test result.

Huang believes that there are two reasons why the reinfections have occurred: The vaccine could be ineffective against the UK variant, and people respond differently to the vaccine based on their immunity levels.

The local authorities confirmed on May 25 that out of the seven new cases, five people tested positive for the B.1.1.7 variant virus, known as the UK variant, while the remaining two cases are still under investigation.

Shenzhen residents are currently receiving homegrown vaccines—CoronaVac and Sinopharm—a staff member from the Shenzhen Municipal Health Commission told The Epoch Times on May 25. The staff member said the vaccination doesn’t guarantee full protection from COVID-19, but declined to comment on the efficacy of Chinese vaccines against the UK variant.

Another employee of the shipping company, named Wu Hua (a pseudonym), told The Epoch Times on May 24 that almost everyone in the company, including himself, are quarantined in a hotel while getting a nucleic acid PCR test once a day.

Wu noted that the communities where the seven infected people reside are under lockdown, and residents were tested approximately three times.

Since May 21, local authorities locked down communities and carried out mass testing, which they call “one day one check” for approximately 7,395 residents in the Yantian Port area, which means thousands have been tested every day. People who live in the same apartment buildings where the infected port workers reside are tested three times per week and are under quarantine, and buildings are sealed off.

A resident from Donghai Lijing Garden housing community, where another infected port worker, surnamed Shi, resides, told The Epoch Times on May 25 that the residential buildings have been locked down for several days, and they were tested twice.

A video that recently circulated on Chinese social media platforms shows that residents of the Yantian District were tested overnight, and guards are stationed at the entrance of the community, preventing people from leaving and entering the area.

Wu isn’t clear about the source of the recent outbreak in the area. The officials asserted that the cases “come from the same source” and that it was “imported from abroad.”

As of May 28, roughly 45 people are infected with COVID-19 in Guangdong Province, according to local authorities.

Due to Chinese authorities’ past record of underreporting infections and covering up information, it’s difficult to assess the true scale of the current outbreak.

Luo Ya and Hong Ning contributed to this report.